Anugraha is a Timeless Oasis for a Family designed by Envisage

A redesign of an old apartment, Anugraha in Delhi is re-interpretation of a neo-modern Indian home in the heart of New Delhi strikes a fine balance between elegant and effortless living 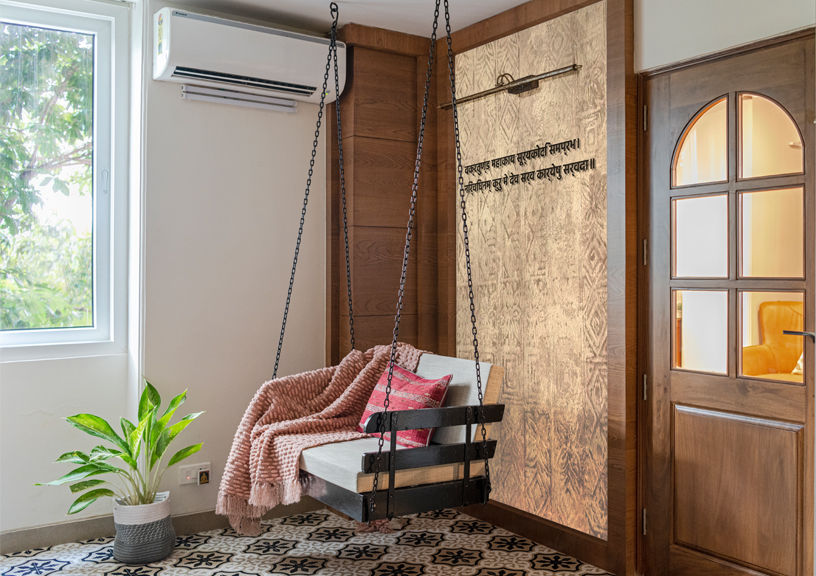 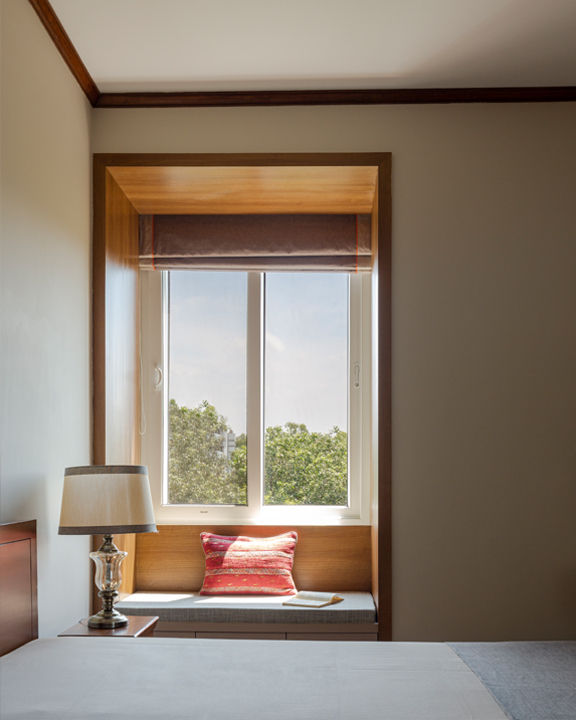 A retirement home for a family of three who have chosen to move into a bustling neighborhood in the heart of New Delhi, Anugraha is an oasis where the residents can preserve their peace of mind away from the chaos of city life. It was envisioned as a redesign of an existing apartment, wherein 1,200 sq ft of the available space was converted into a serene abode within a tight budget. Owing to indispensable civil modifications, the project was driven by a complete turnaround of the old apartment to create a hassle-free and efficient living unit, compliant with the client’s lifestyle choices and coherent with the design language unique to the architects.

The clients wanted a traditional Indian theme that would appeal to their taste, thus Anugraha’s design manifests as a sophisticated and subtle reinterpretation of a neo-modern Indian home that is clutter-free and compact to suit the family’s needs. The project strikes a fine balance between a light subtlety and a warm elegance that gives it life. The overarching concept is a Scandinavian milieu in combination with a structured bohemian mood. Mrs Sharma was assertive in her requirement that the house facilitate effortless living, and thus the planning was governed by the principle of maximizing every inch of space. 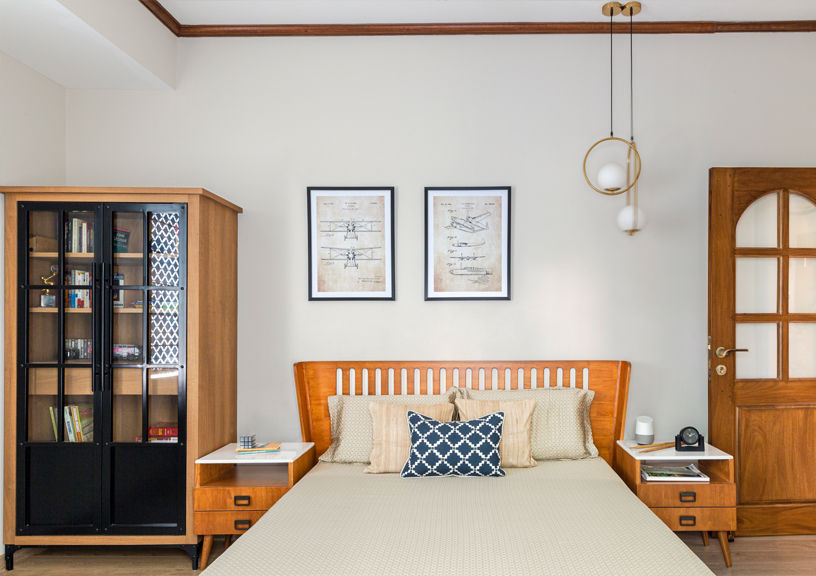 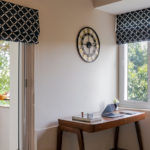 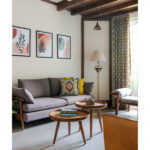 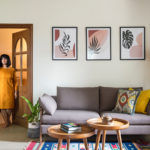 A few significant changes have gone a long way in creating timeless spaces. The first, after extensive deliberation with the clients, was the kitchen wall that was brought down to create an airy, open-plan living area, with an option to close up when required with the help of sliding folding shutters. The new, open kitchen is framed by bold wooden edge beam paneling, which acts as added storage and separates the space perceptually from the rest of the living room. This simple change allows for the incorporation of unique features such as a breakfast counter and a dining nook, to create ample space to host guests within the limited floor area. This change also encourages a visual connection around the living area, making the space appear larger.

The second striking change is the optimization of windows and doors, replacing them with UPVC windows and Mediterranean-style glass-paneled doors that expedite the natural flow of light and air through the rooms and from the outdoors—something that has instantly opened up the house to the greenery around the apartment, thereby welcoming the sun and the seasons into the space with open arms. Nature serves as a subliminal text to the design language, drawing inspiration from the lush greens right outside the window and bringing in elements of botanical prints and Indian cotton fabrics for the upholstery to elevate the design with a pop of print. The palette for the finishes and textures across the house is muted neutral tones, used in the flooring and the walls to balance the mix of pastel botanical art across the space. 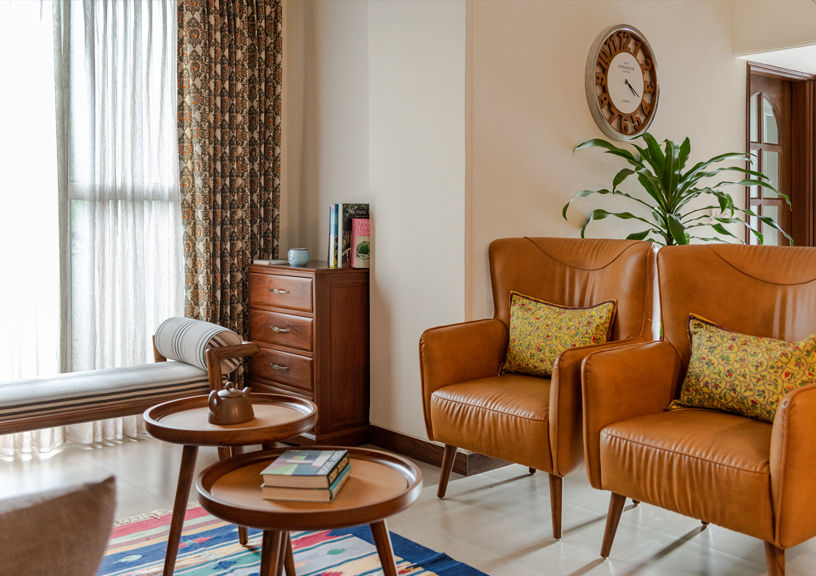 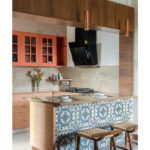 The definition and depth in design are accentuated by the use of edge molding running along the wall and ceiling joints, and the skirting to the floor to articulate the edge as in pencil sketches. A level difference in the ceiling towards the balcony is tackled by creating a wooden rafter ceiling with the use of veneer paneling for a subtle expression of separation within the open plan. The living room furniture is light and sleek, while accommodating enough seating and ensuring that the views, light and access are unhindered. The flow of movement is choreographed well with the use of L-shaped seating in the dining nook, which doubles up as storage and creates an optimized layout in the most public zone of the house. The contrast of the neutral upholstery of the dining area and the floral feature wall acting as its backdrop creates a striking impression at entry.

The couple has a young son who categorically preferred personalized touches of industrial style to mingle with the muted tones that flow through the house. The wardrobes have been developed with a wooden frame and metal structure to bring in the rugged aesthetic, while not unsettling the overall theme of the house. In the master bedroom, the building policy has been leveraged to allow for minor changes to the facade and the window has been pushed further away to create a seating along the bay window, which functions as storage as well as a design feature bridging the indoors and outdoors. The furniture palette to compliment the theme has been chosen in a distinctive mid-century modern style. The concept is enhanced by the use of wood as the predominant material to bring warmth to the spaces. All furniture and decor pieces are inspired by the themes of nature and Indian traditionalism and have been sourced locally.

A home is built with the foundation of belief, like the one that the clients harbor in their devotion for their spiritual teacher, which required a multipurpose room to serve as a religious sanctuary, guestroom and multimedia room. The multiplicity of functions within this room was a challenge that has been tackled deftly by identifying the primary requirements. The bathroom is knocked off to distinctly design zones within a restricted floor area. To revere their belief, a chamfered wall in the living room is designed to hold the seer’s photograph as an ode to his importance in the family’s life. One of the walls is refashioned into floor-to-ceiling storage to efficiently maximize the space available. The flooring here is differentiated with a subtle floral print over neutral tiles to distinguish the sanctity of the room. Such small gestures contributed to making the project a relatable home, one that the owners can identify with and picture themselves savoring for decades to come. 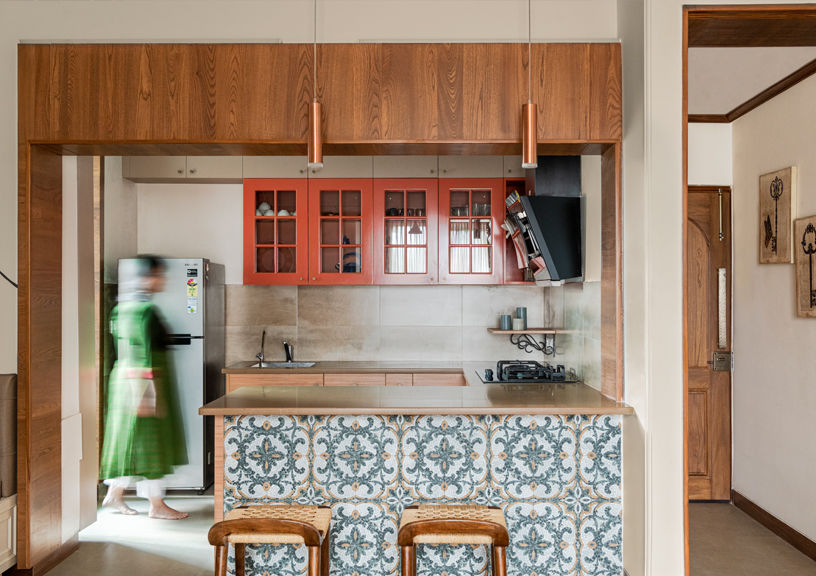 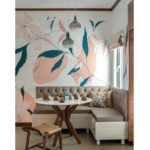 While the home is small in scale, it packs a punch in terms of impact owing to the attention to detail. Addressing the challenge to create a space that embodies a design thought sensitive to the clients’ lifestyle has been tackled proficiently. Drawing inspiration from the clients’ positivity and tireless involvement in the journey of designing this space, coupled with a constant influx of passion and faith, the architects have strived to take the process of creating a home a notch up.