Founded in the year 2012, the architectural studio VMDPE Design imparted the creation of environmental systems and choices that were for the professional development of children within different educational institutions. Due to their renowned portfolio of projects, in the year 2019, VMDPE was invited by the Ministry of Housing and Urban-Rural Development of China and The Architectural Society of China, to be one of the drafting members of the Design Manual – Daycare Facilities Specification. 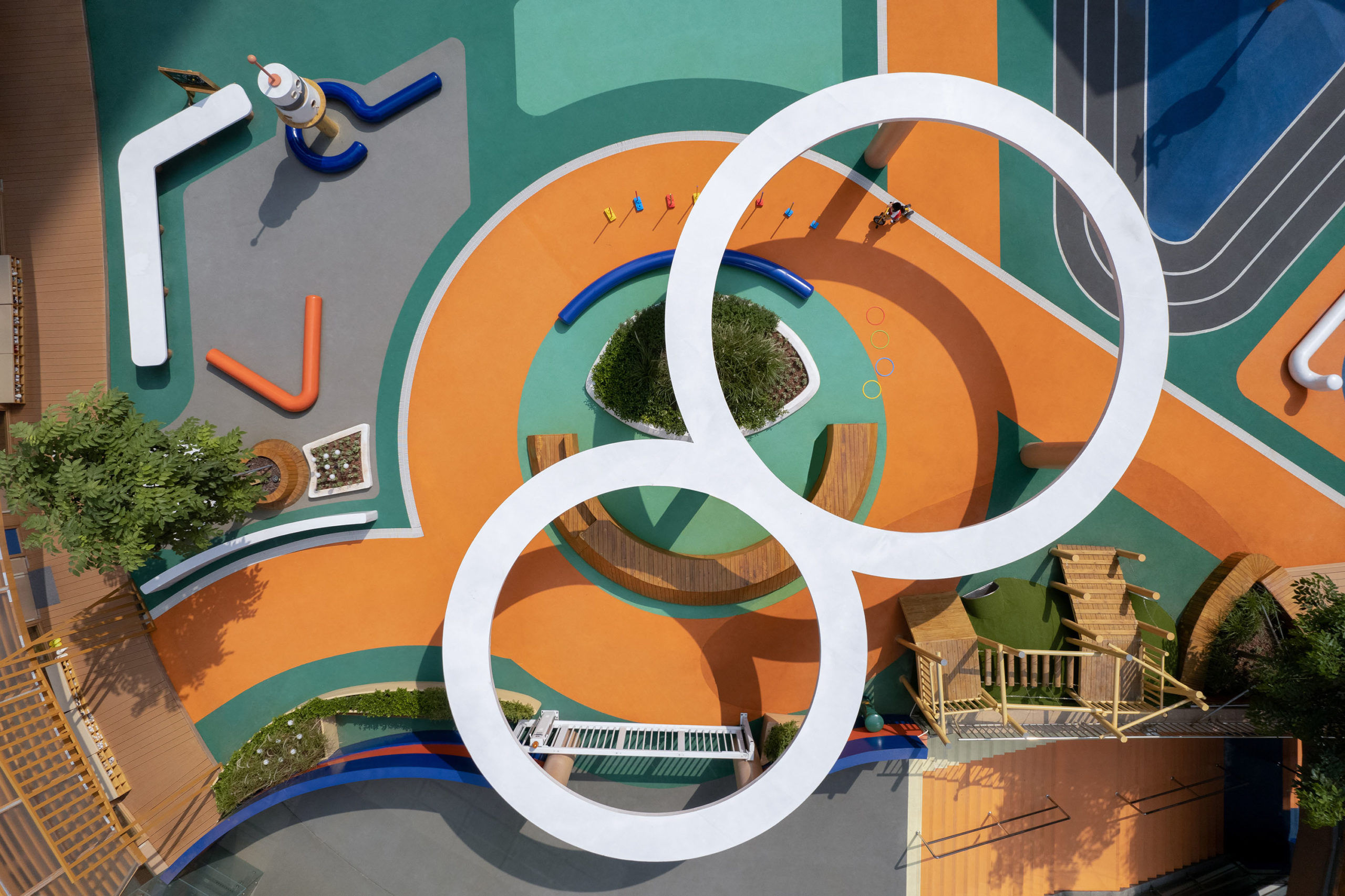 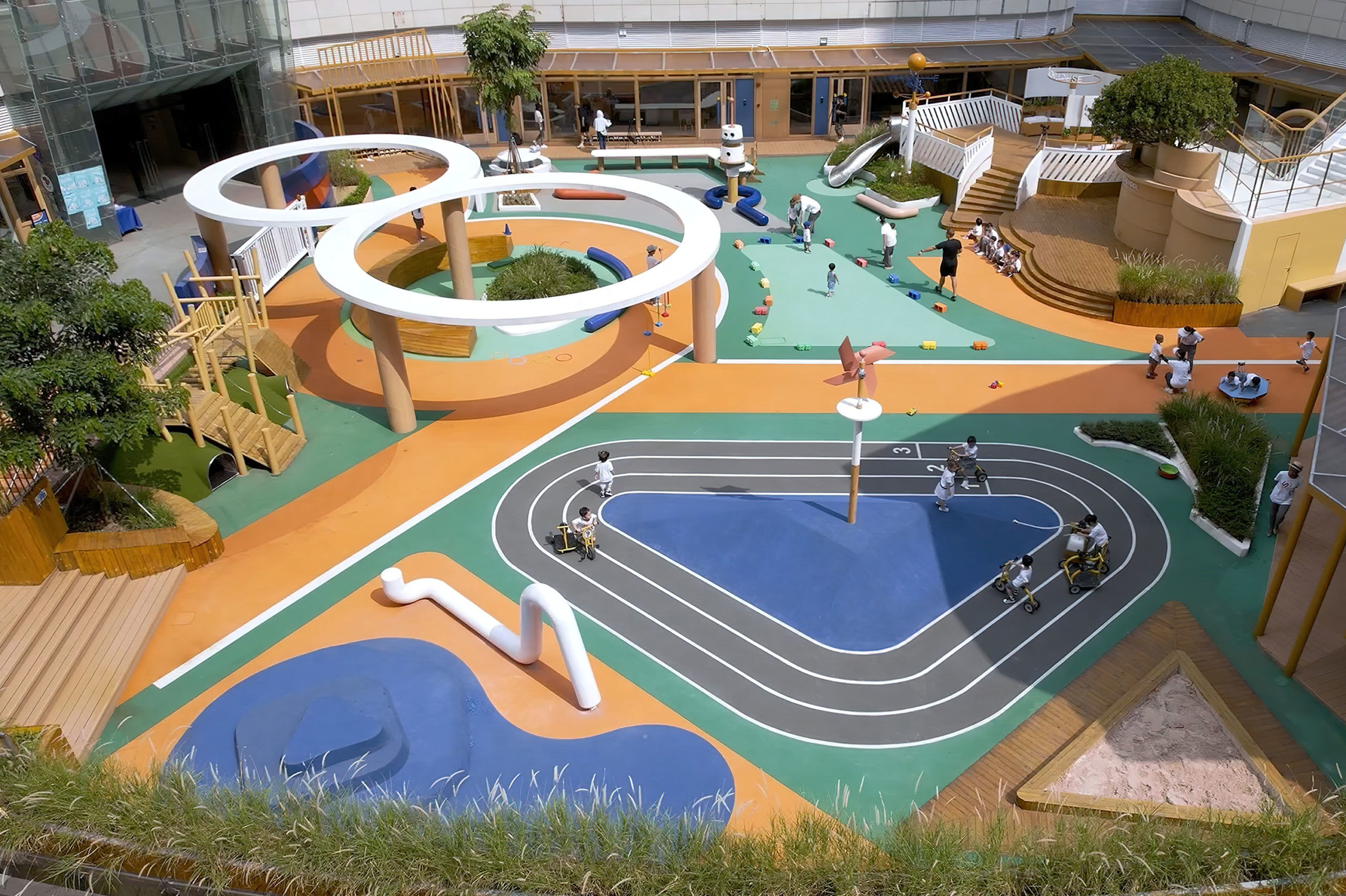 A non-conventional space at the terrace of a mall building in Dachong is now the latest attraction of Shenzen in the Greater Bay Area of China. Built by VMDPE design, the IBOBI Super School stands true to the studio’s concept which is “Re-thinking children’s environment”, from the perspective of teaching, safety, interaction, technology, and business to fully observe and reevaluate the relationship between space design and children’s education. 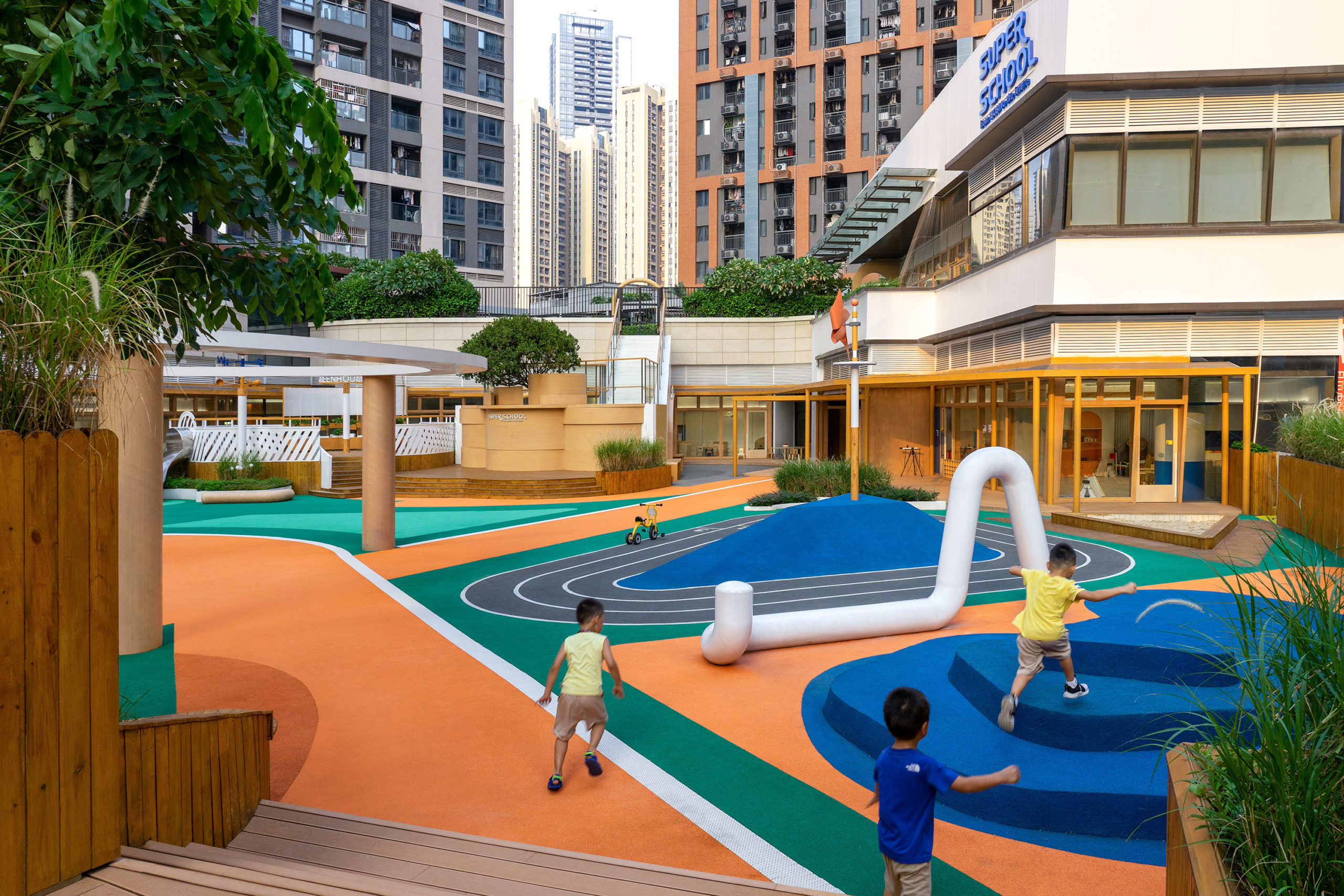 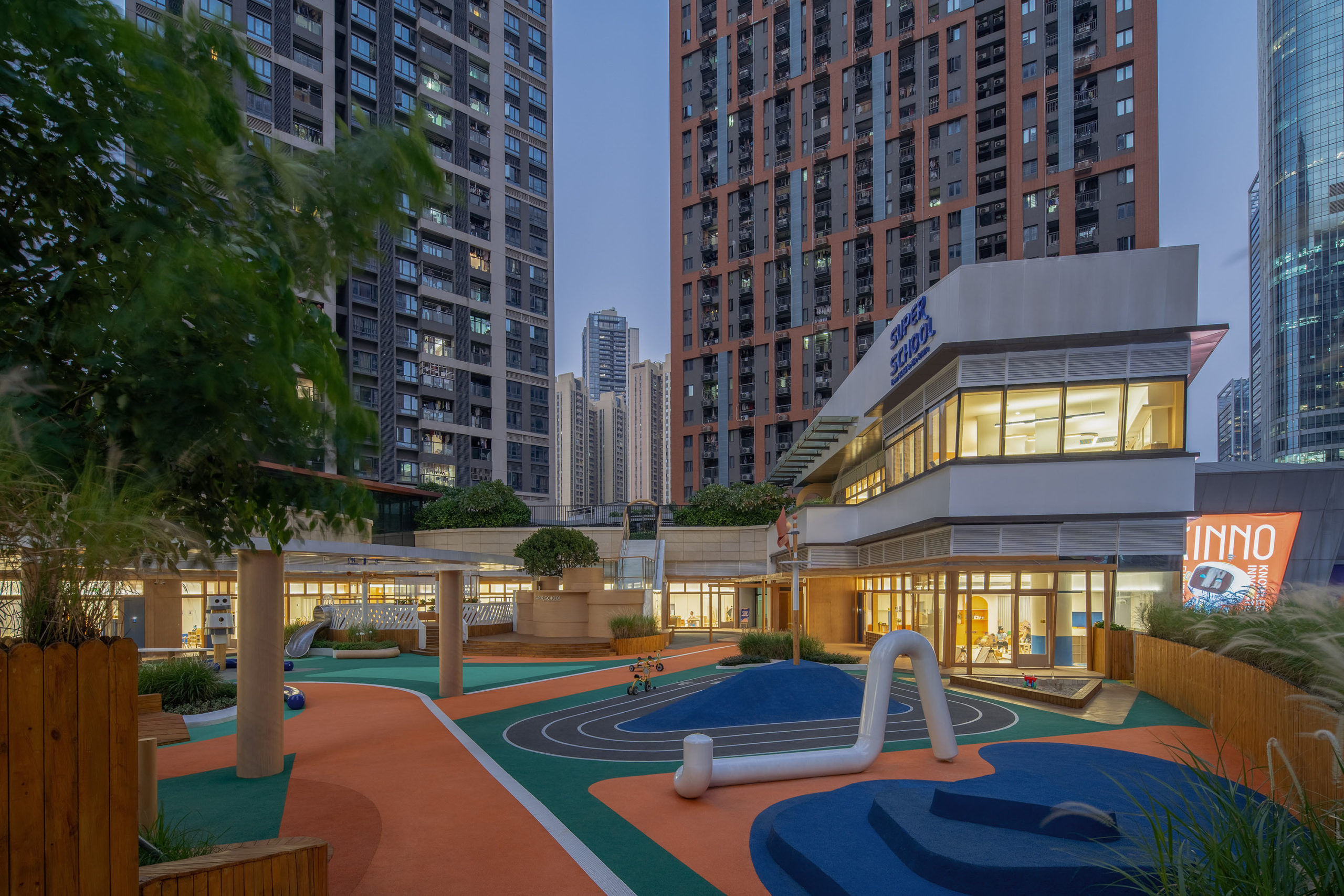 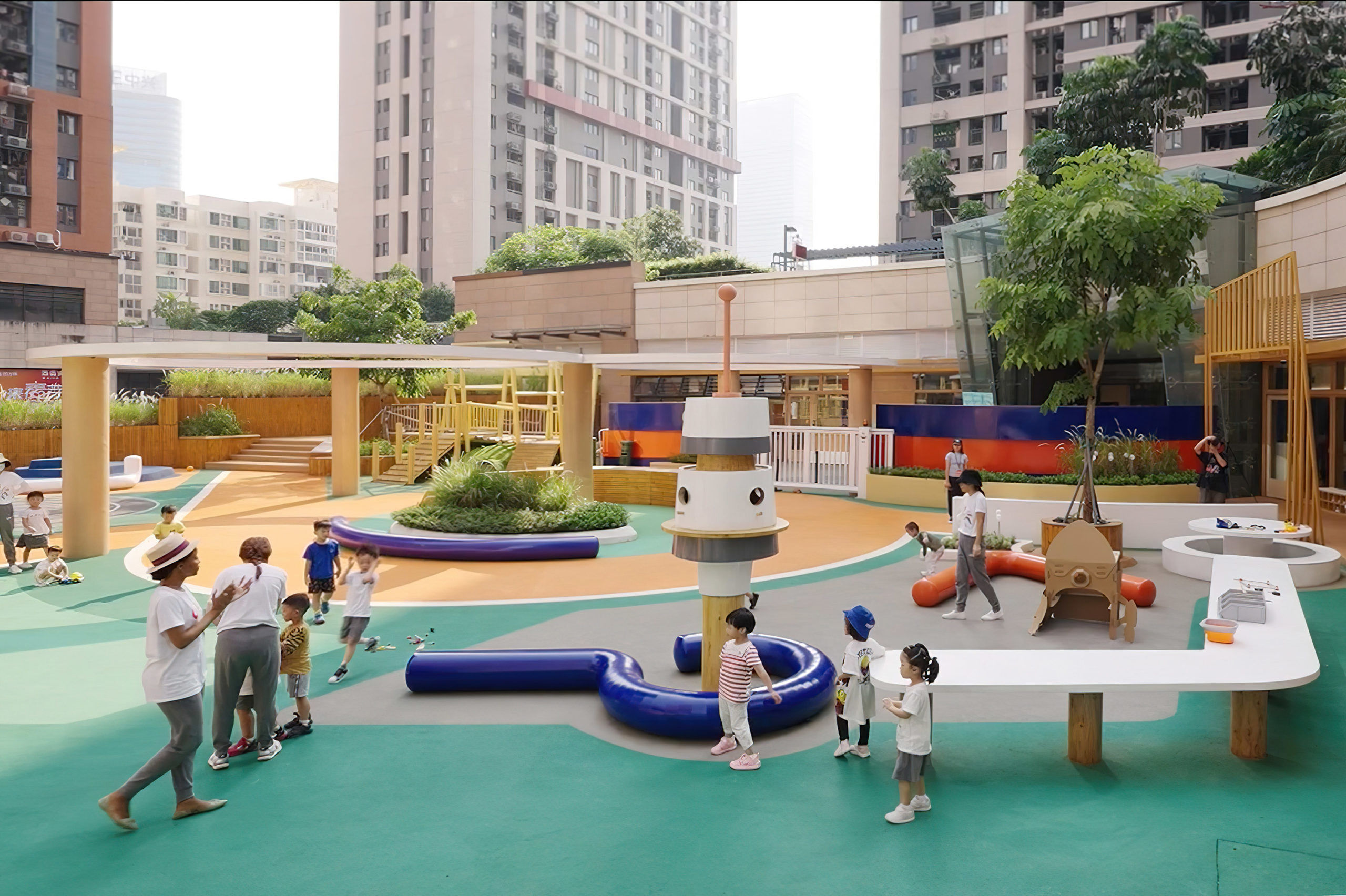 Silver grass swaying in the light breeze, joy and laughter fill the air while children enjoying themselves. These are exactly the childhood memories we hope to bring to the children living in this city. 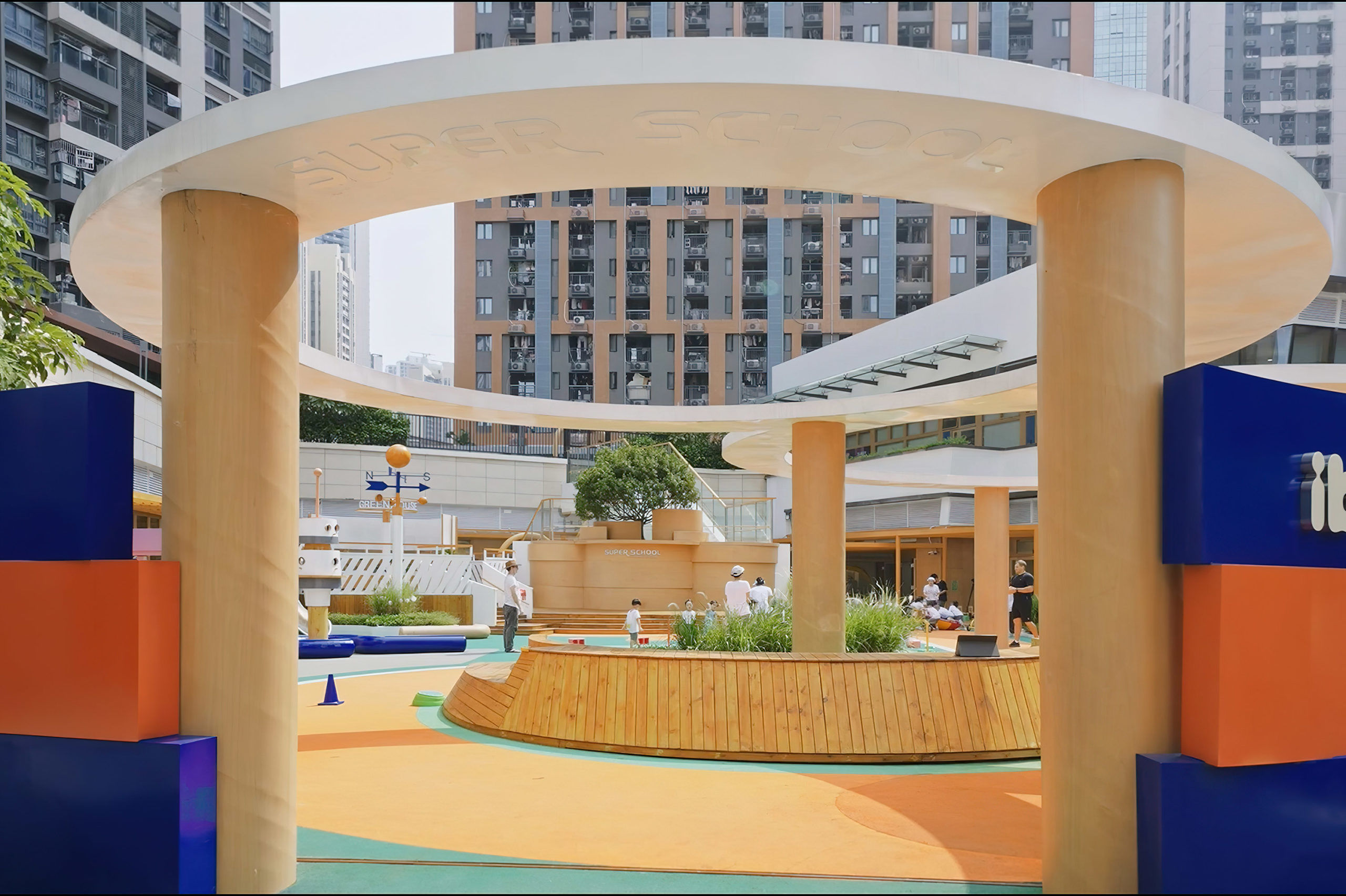 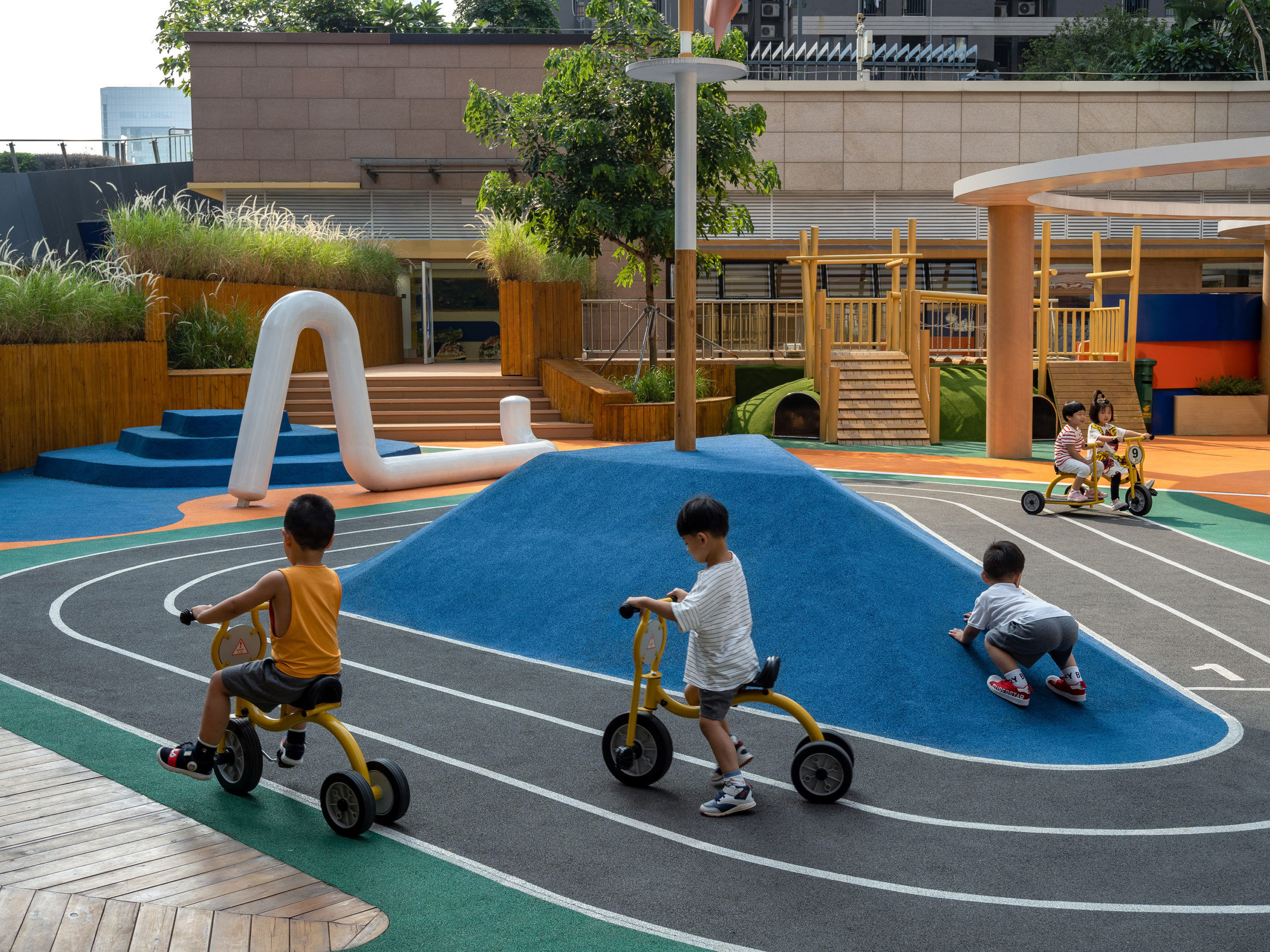 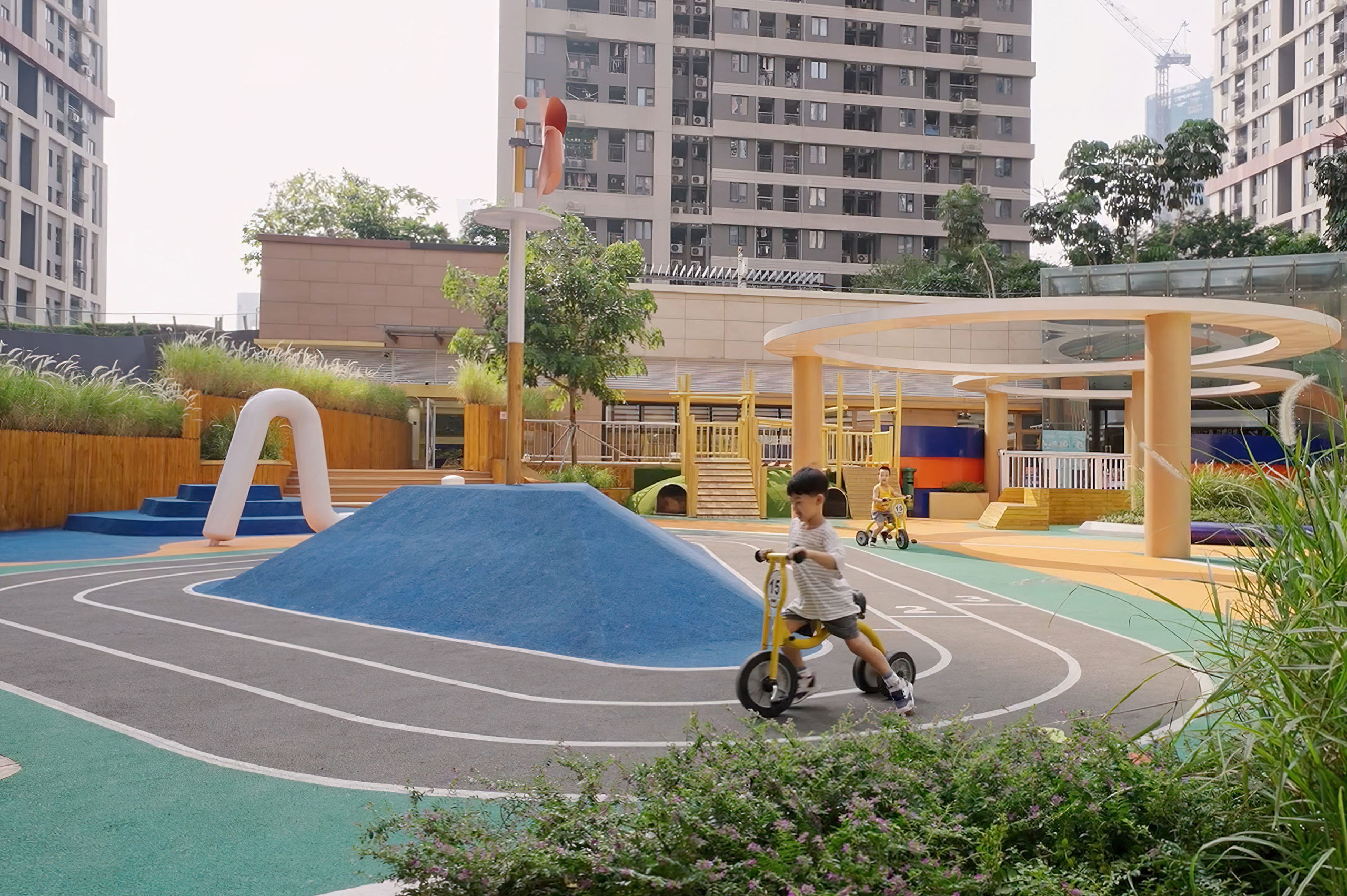 The culture at Dachong transforms itself into a gathering place for techies and futuristic organisations, as to why it is synonymous with prosperity and potential. The environment here also greatly required an efficient kindergarten with integrated accessibility owing to the dense building and high plot ratio equating to the busy families inhabiting the town. Therefore, the IBOBI Super School is a project for a greater purpose and preparation. 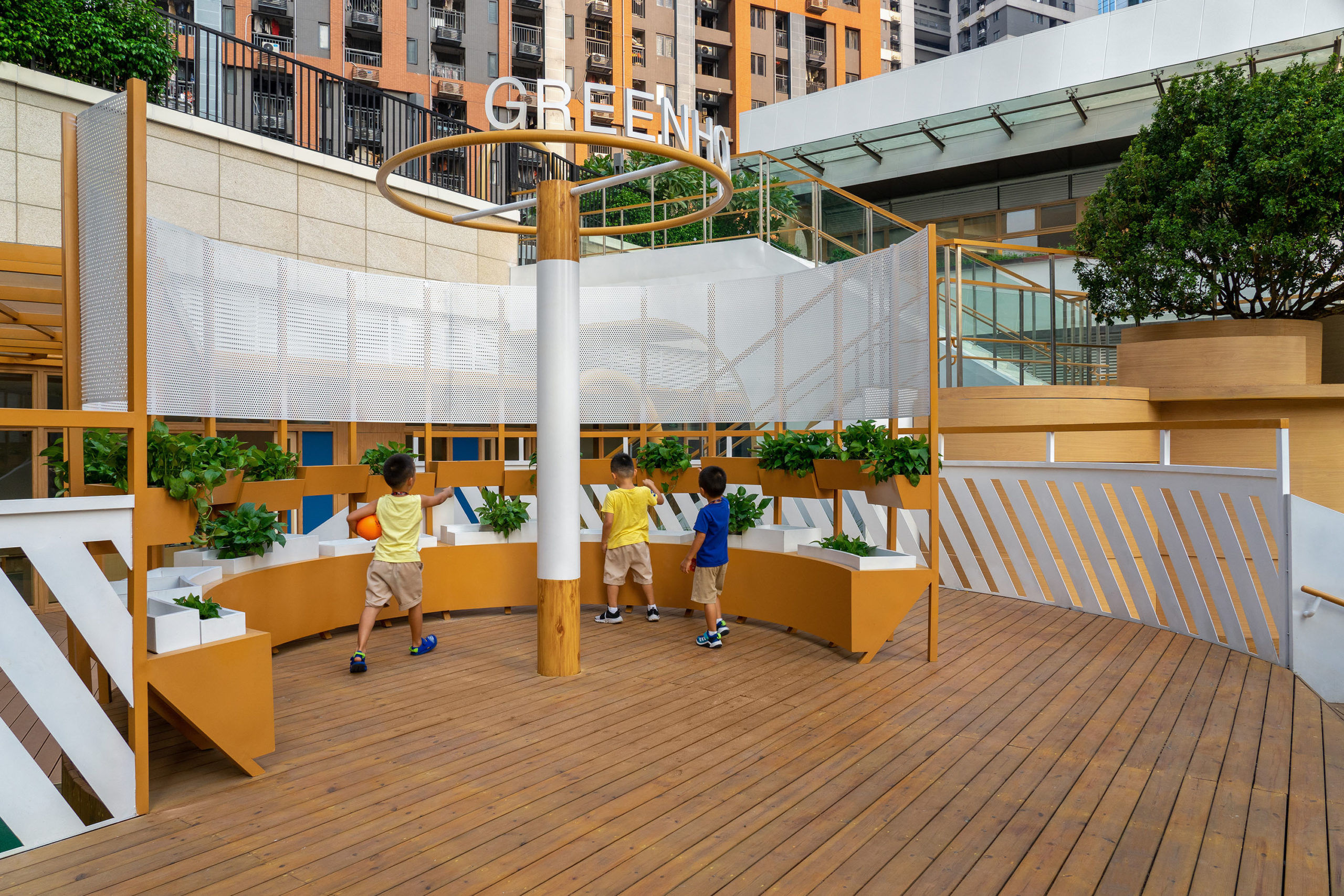 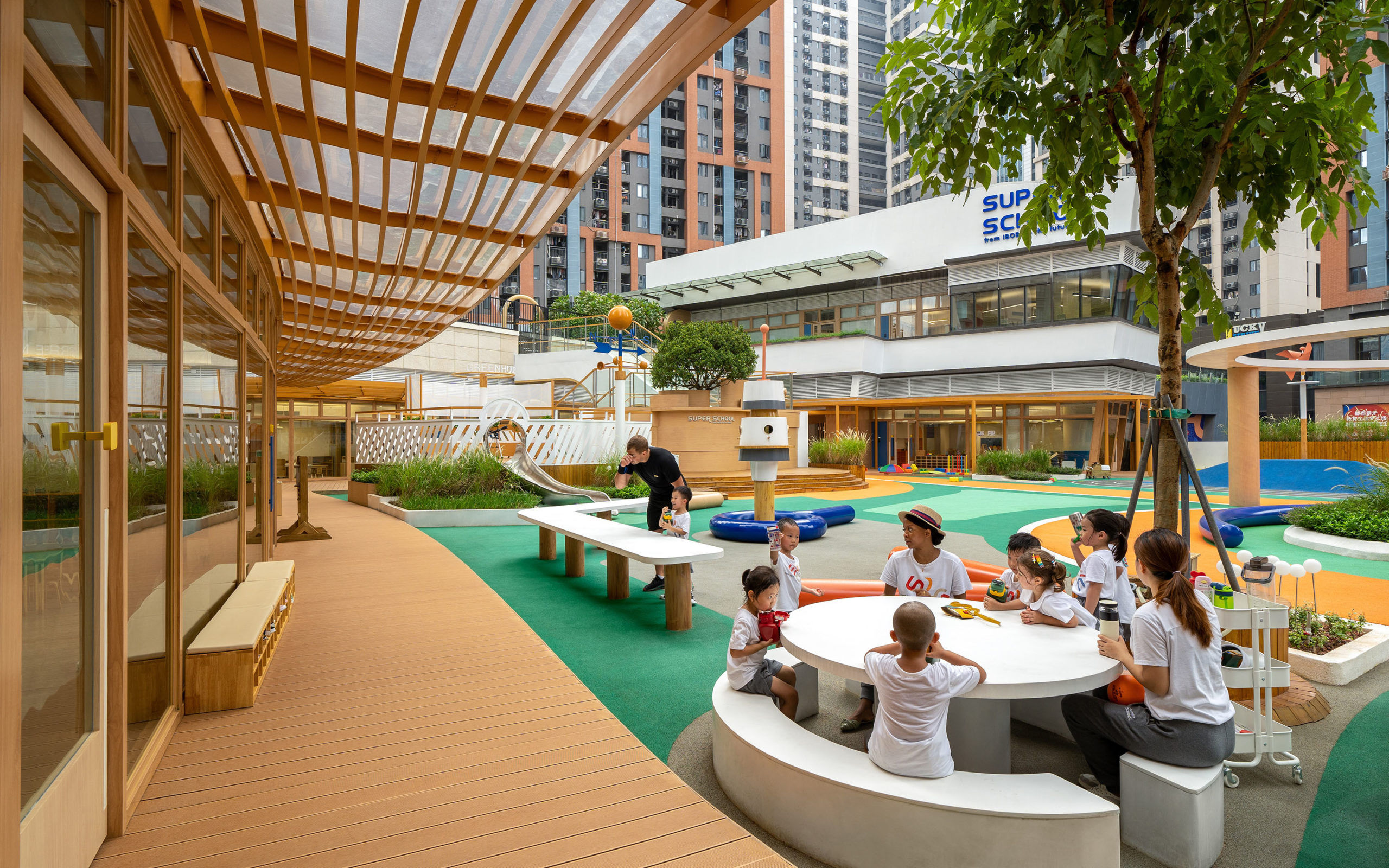 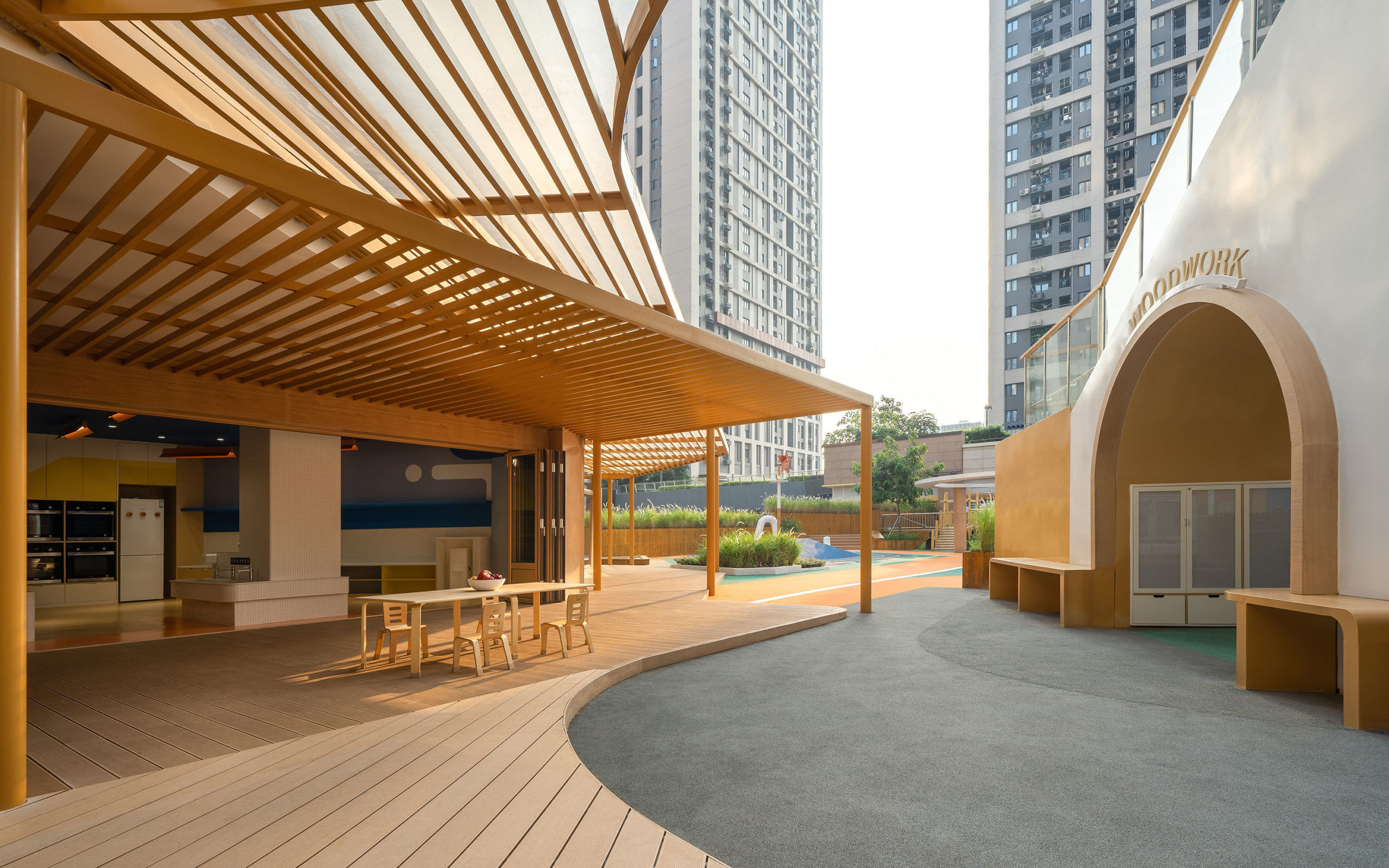 Additionally, the location of the Kindergarten on a terrace categorised the School as a project filled with amusement and innovation. The outdoor terrace and the indoor space are well connected to each other, forming an enclosed site. To make maximum use of the large outdoor spaces, the architects consistently questioned themselves about the kind of outdoor teaching spaces that children need. Did it have to be connected with nature? or was it for Running? or was it supposed to act as an exciting playground? 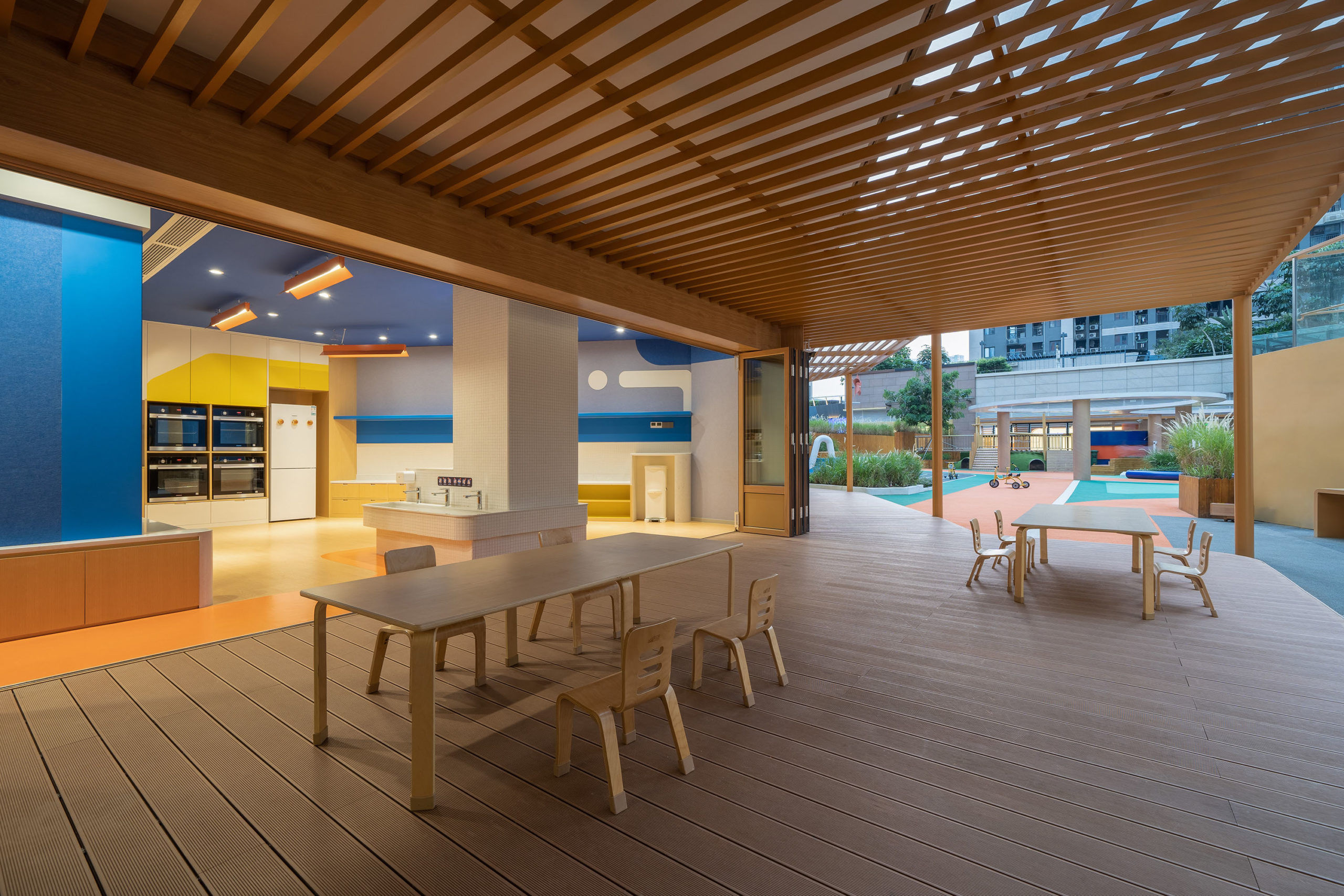 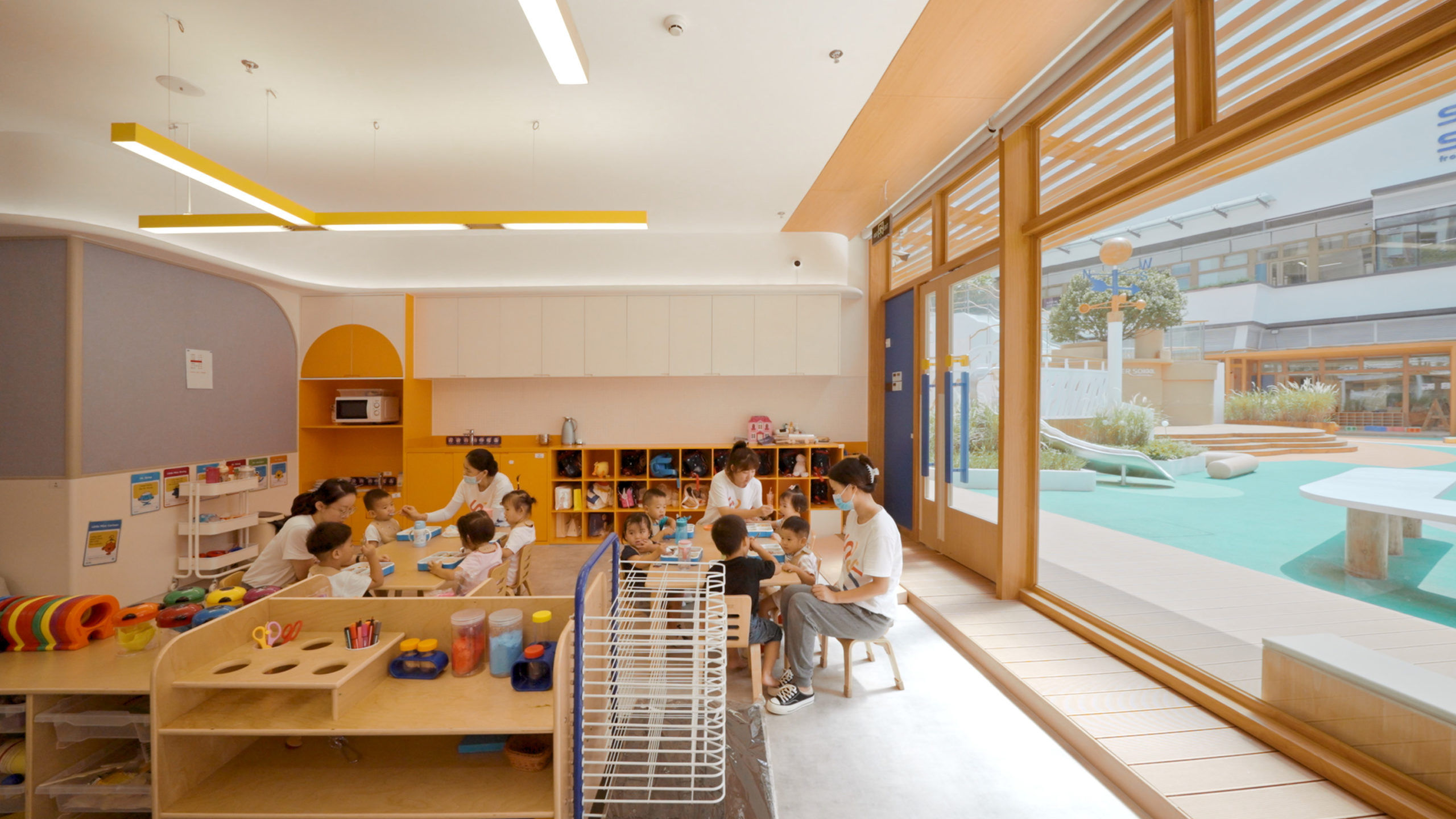 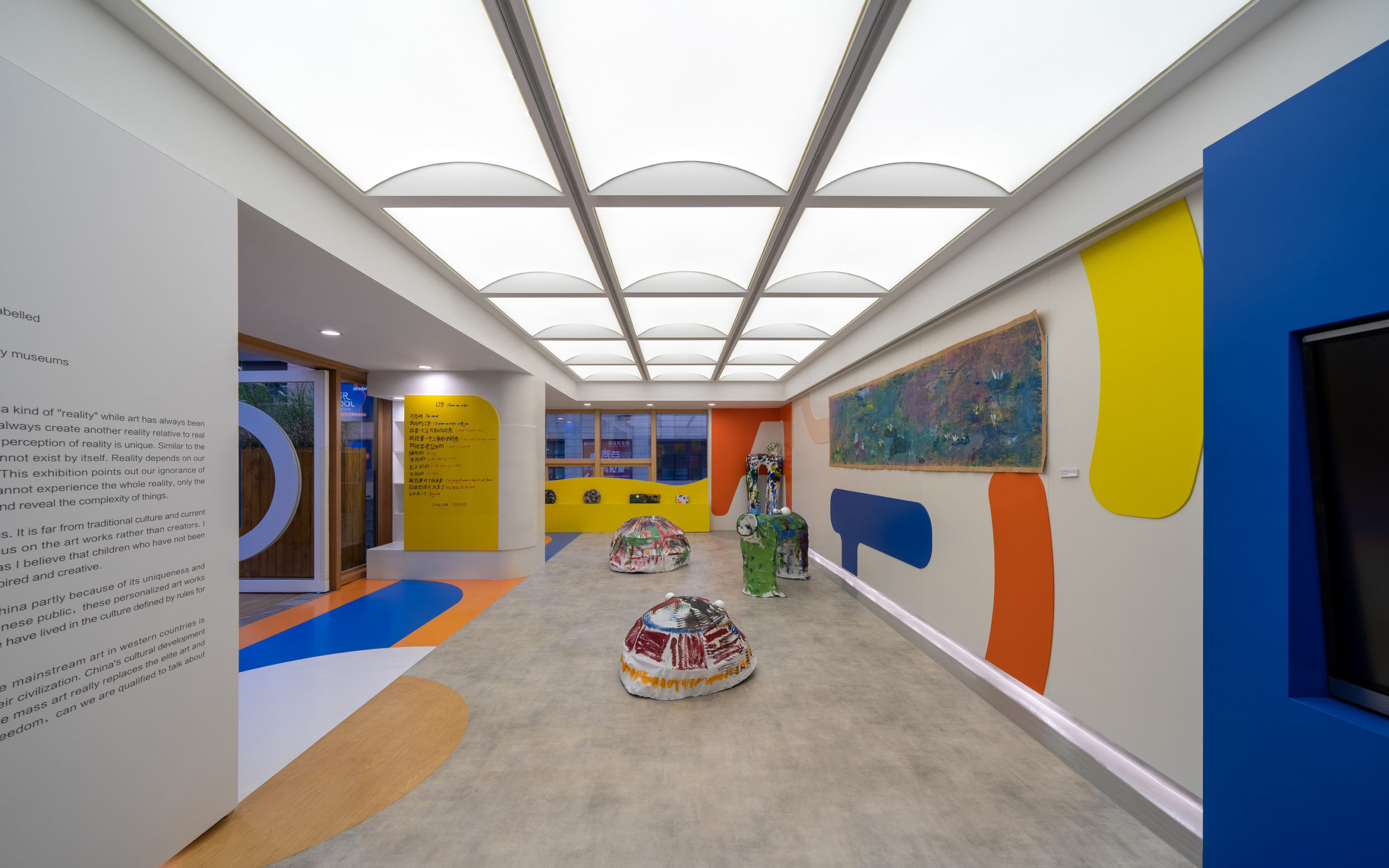 These questions one after the other, led them to consciously rethink and develop the various connections between the outdoor space and children, by trying to explore new possibilities among “playground”, “sports ground”, “park”, and “classroom”. The many outdoor activities like the Children’s Art Festival, Open House Day, Food Festival etc were initially simplified into 3 programs. And they were namely Outdoor Sports, Classes and Festivals. The idea was to not separate these facilities but rather to integrate and combine them in a creative arrangement. 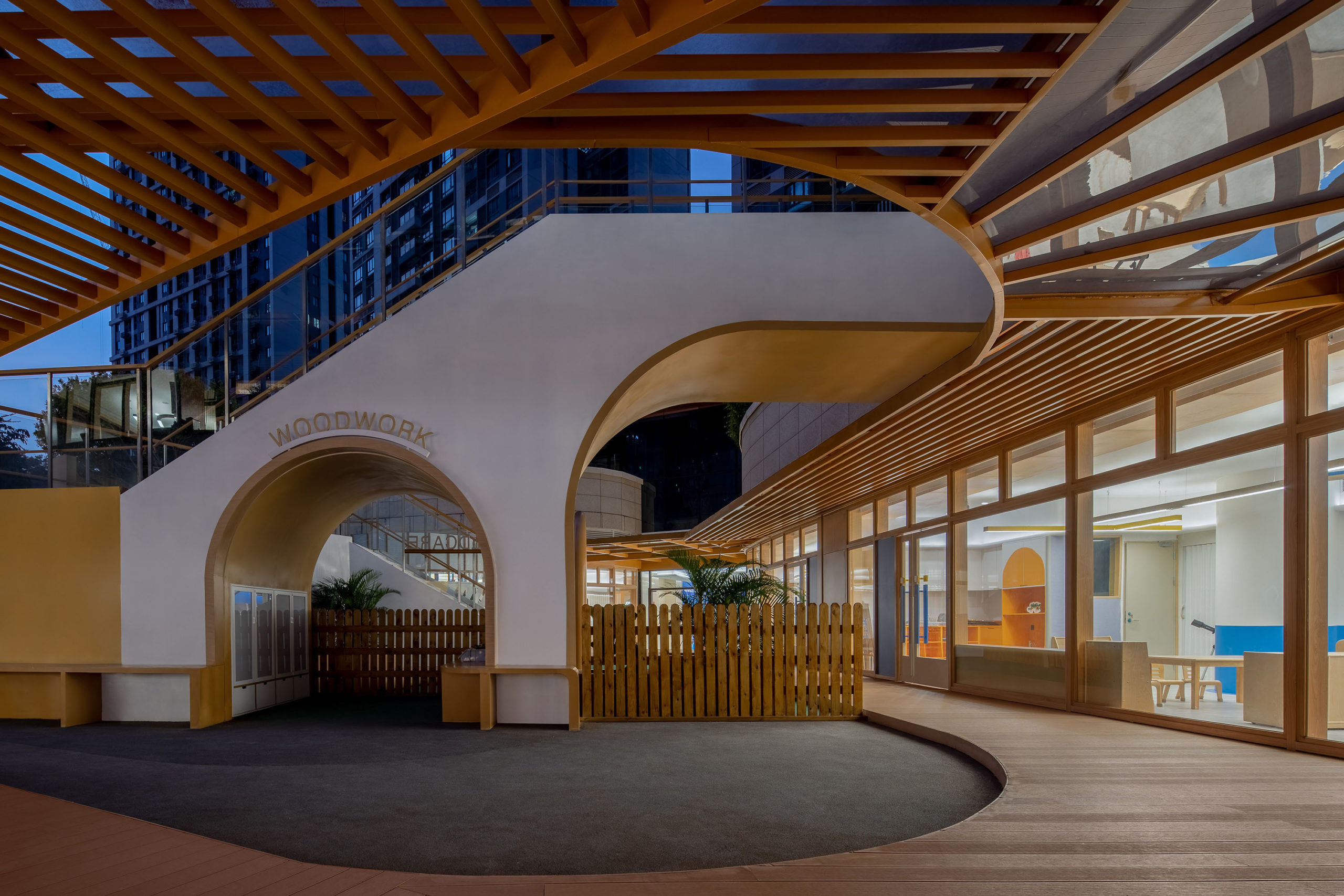 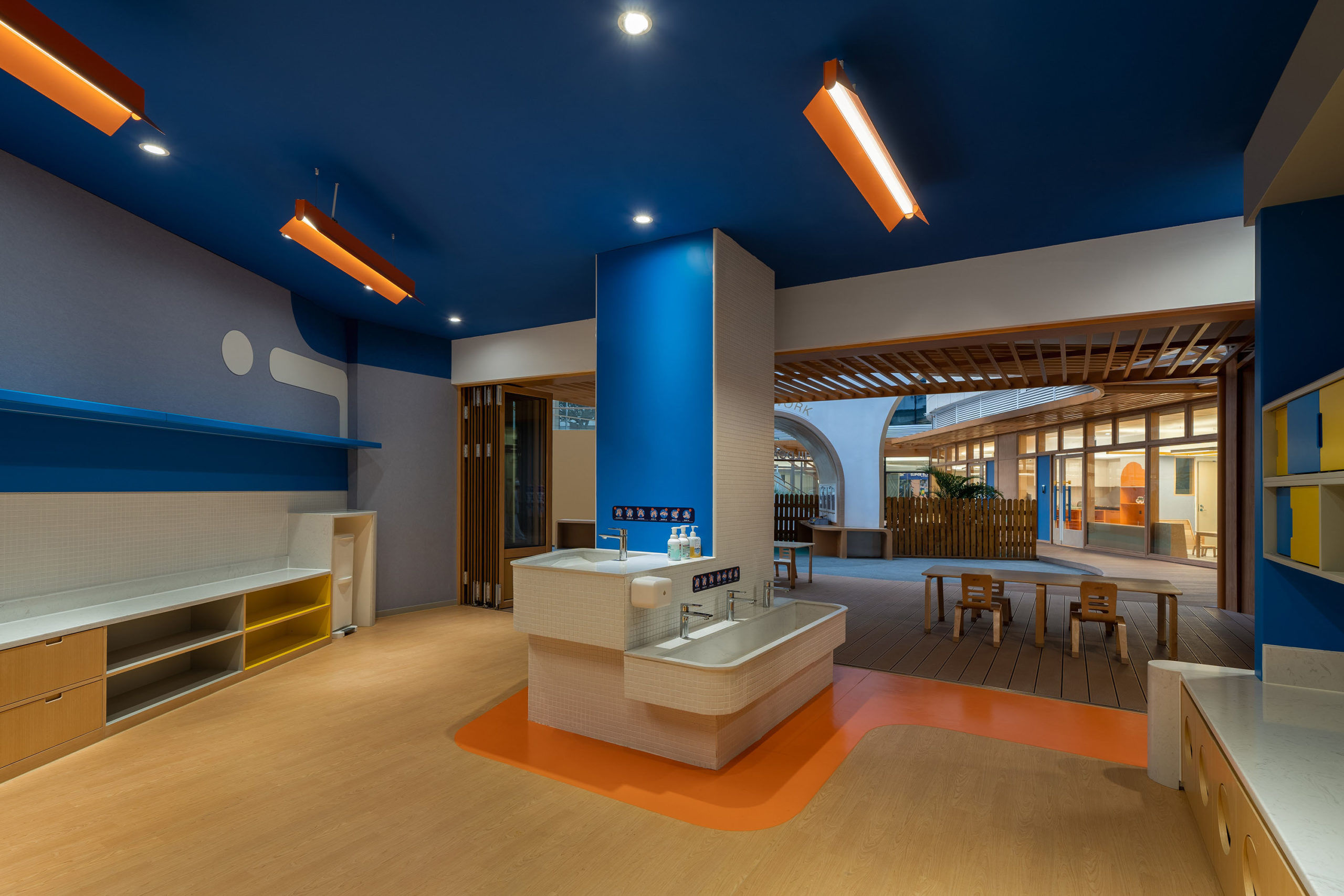 When children want to have an exciting sports competition, the entire space can be utilised for just running and playing and when the school decides to organize an event, the “big tree platform” becomes a stage, and the “gardening area” can be used as a path to the stage. 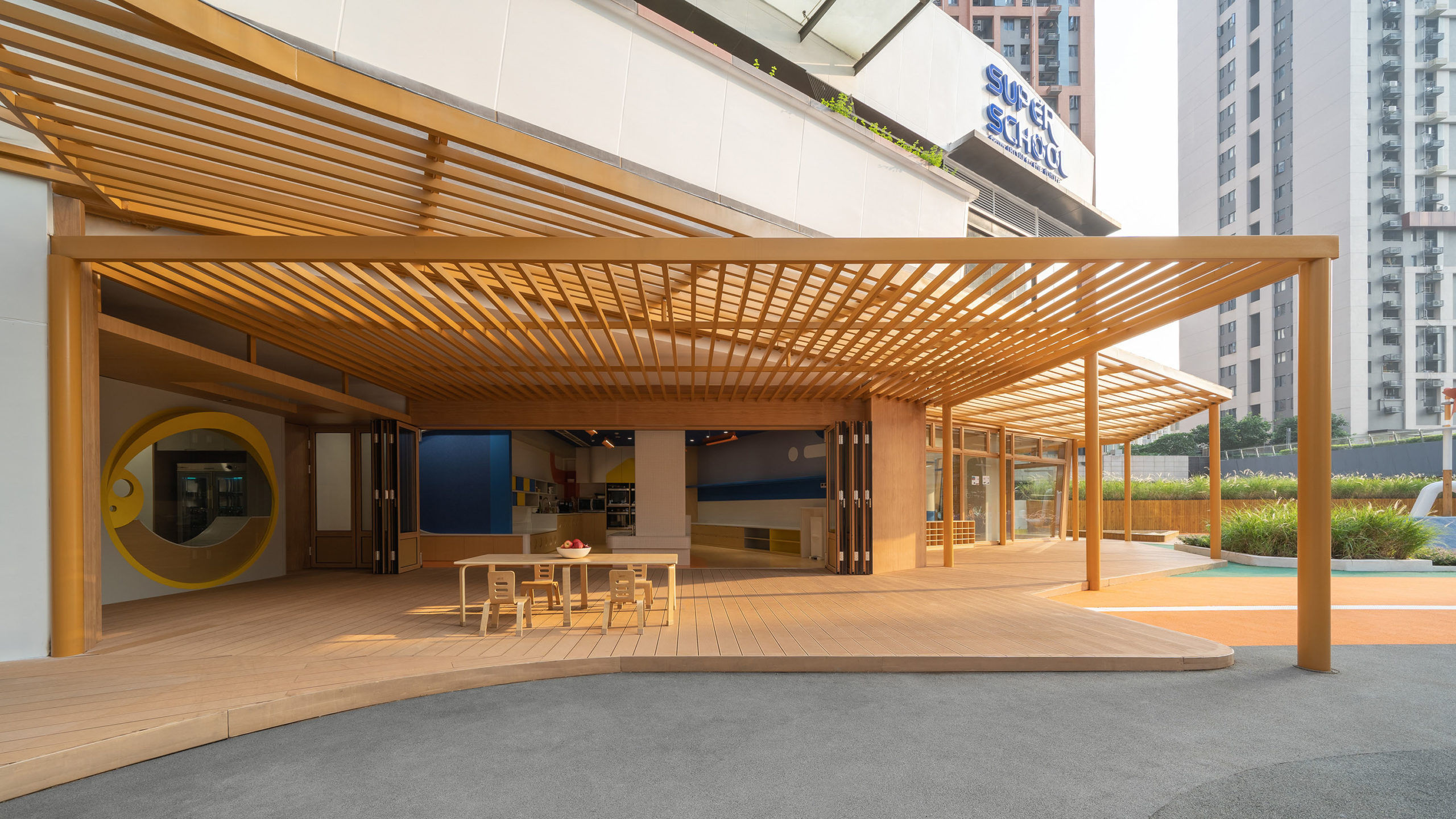 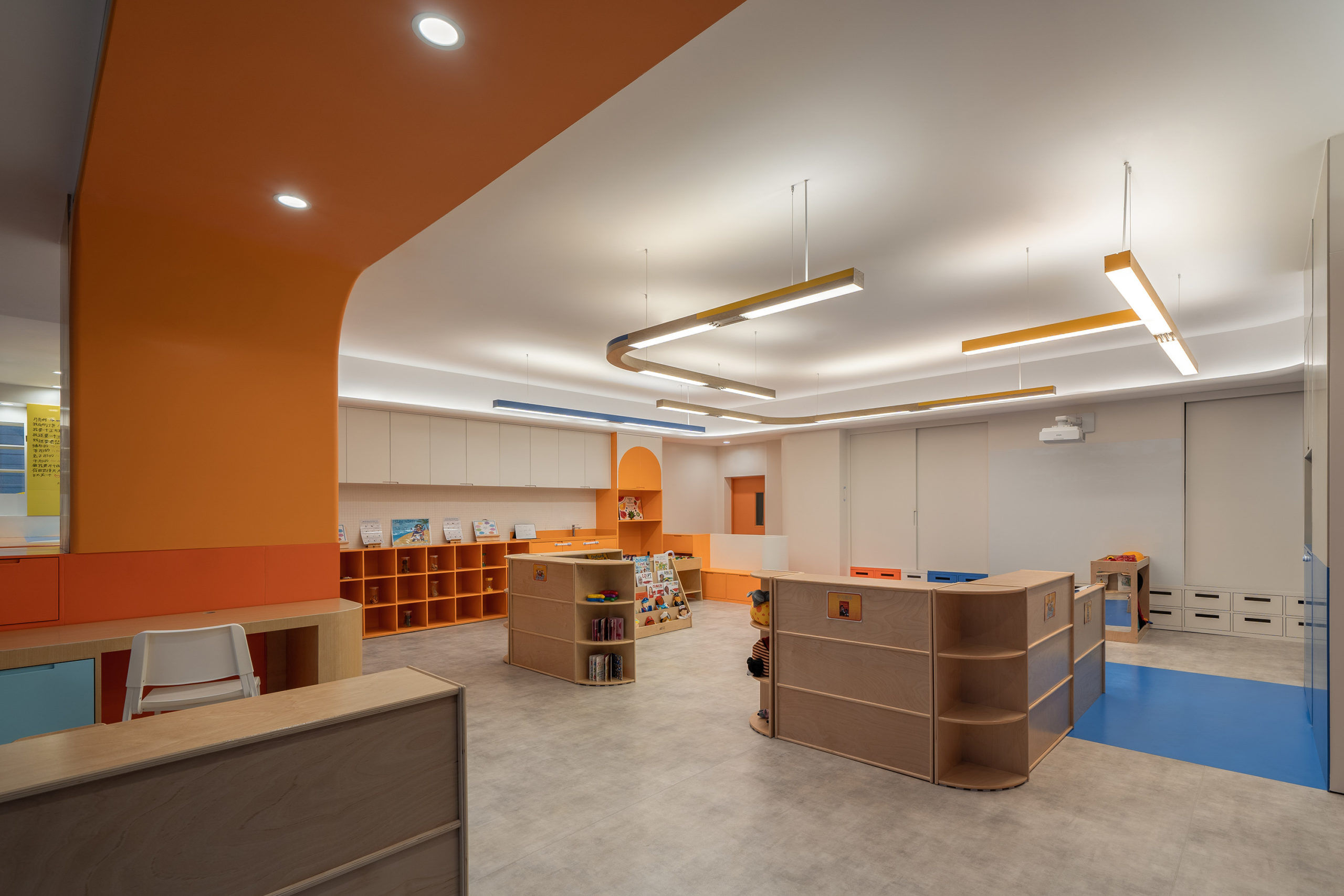 The overall design of the Kindergartens in Shenzen by VMDPE is based on attempting to practise the psychomotor theory sourced from the “Bloom’s Taxonomy of Educational Objectives” by Benjamin Bloom, who was an American educational psychologist. And so, other than attaining fulfilment to this basic idea of spaces, the project design also ventured out to explore and implement flexibility in the way children generally thought about a specific area. For instance, in contrast to a specific game in the playground, the teaching area is also designed to allow children to rely on their own imagination to use it in a playful way. These strategies and concepts are believed to increase a positive curiosity among the students at IBOBI, through the advocation of Outdoor Teaching in a Concrete Jungle.

The subtle yet lively shades of orange, blue, yellow and green promoted a sense of activeness and encouragement to the young kids enrolled at the Super School. The playground equipment was designed in a professional and rigorous way to allow functions and experiences to be visually symbolized, so the children can follow their imaginations in explorations, and gain an understanding of the environment. 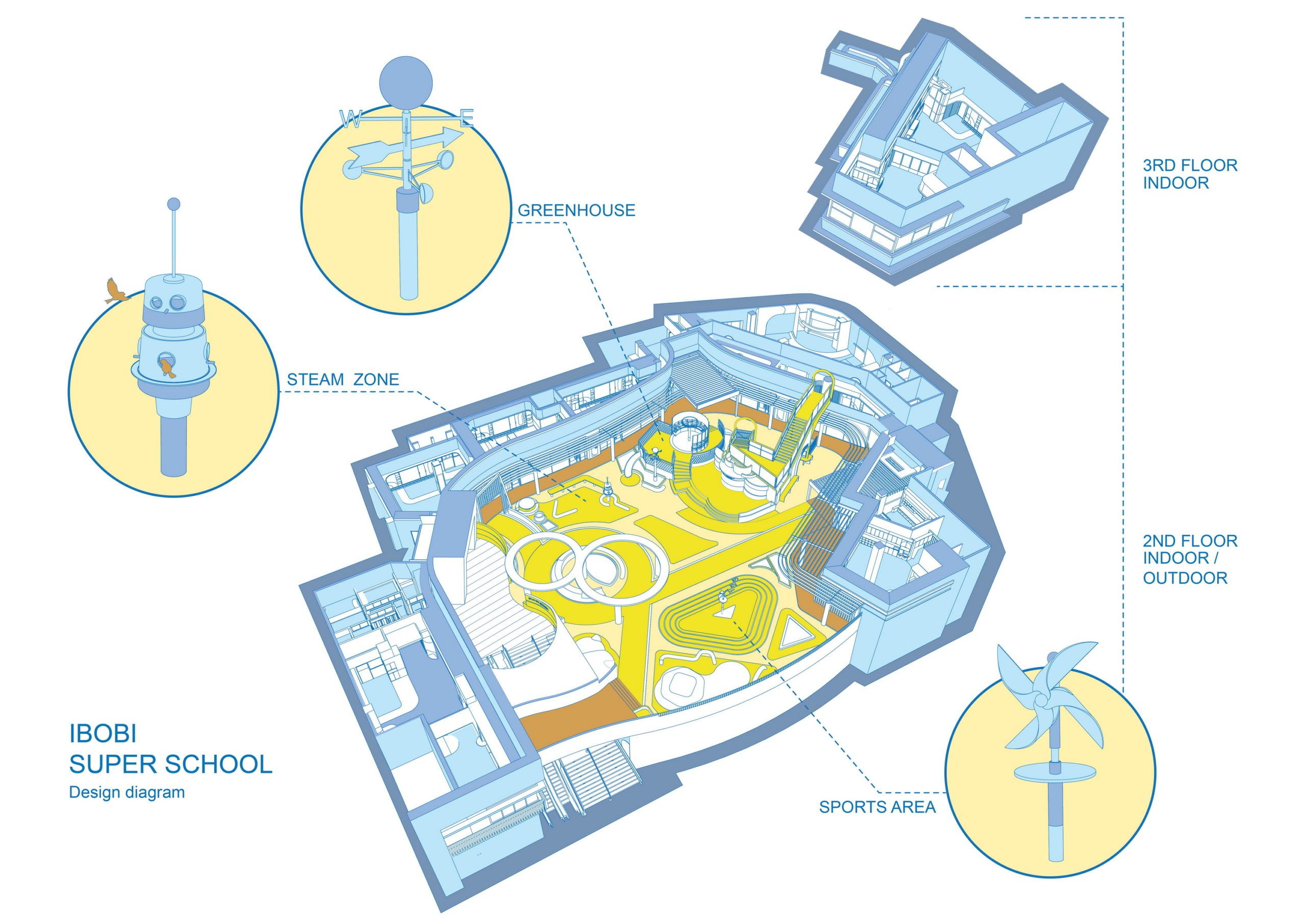 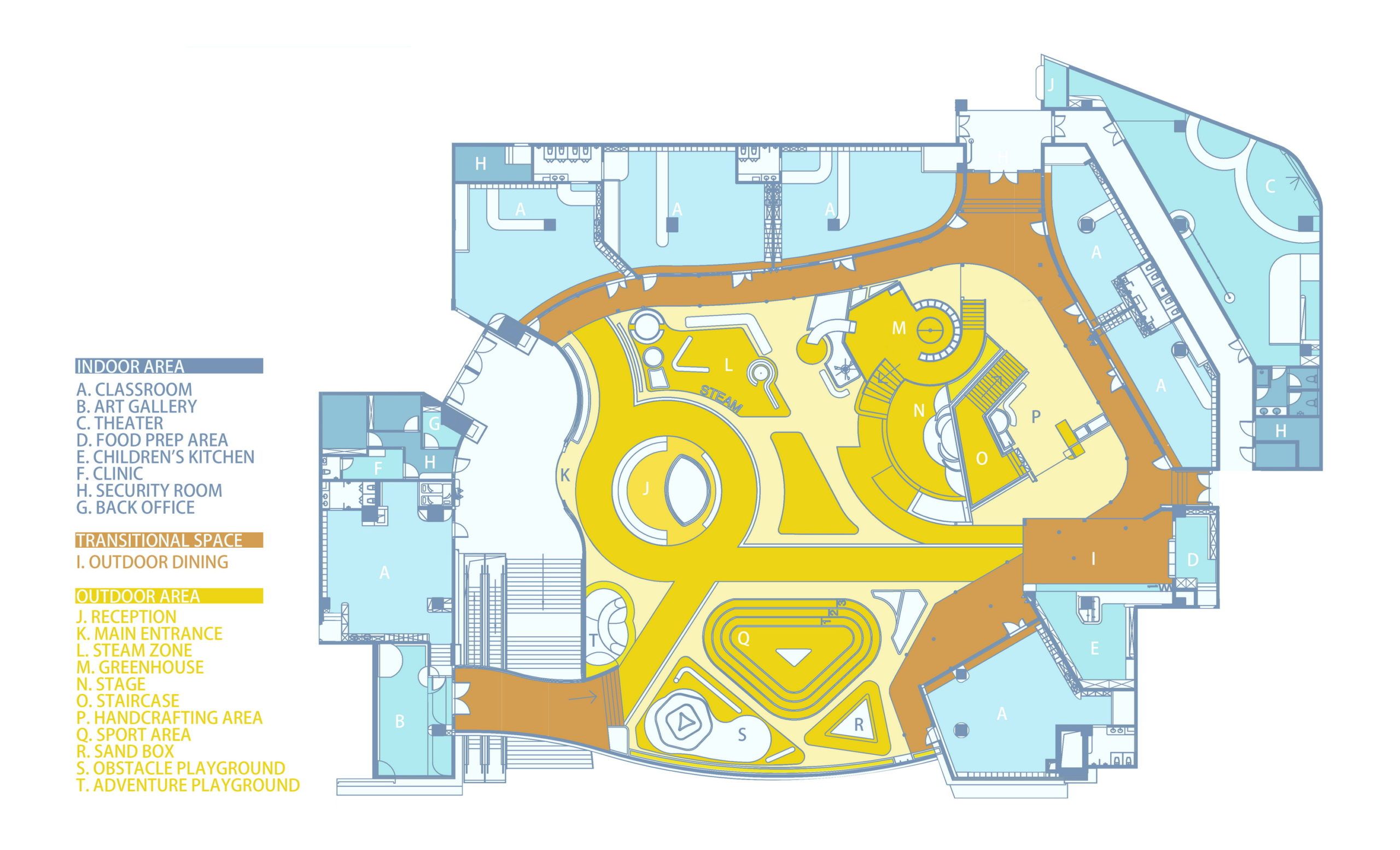 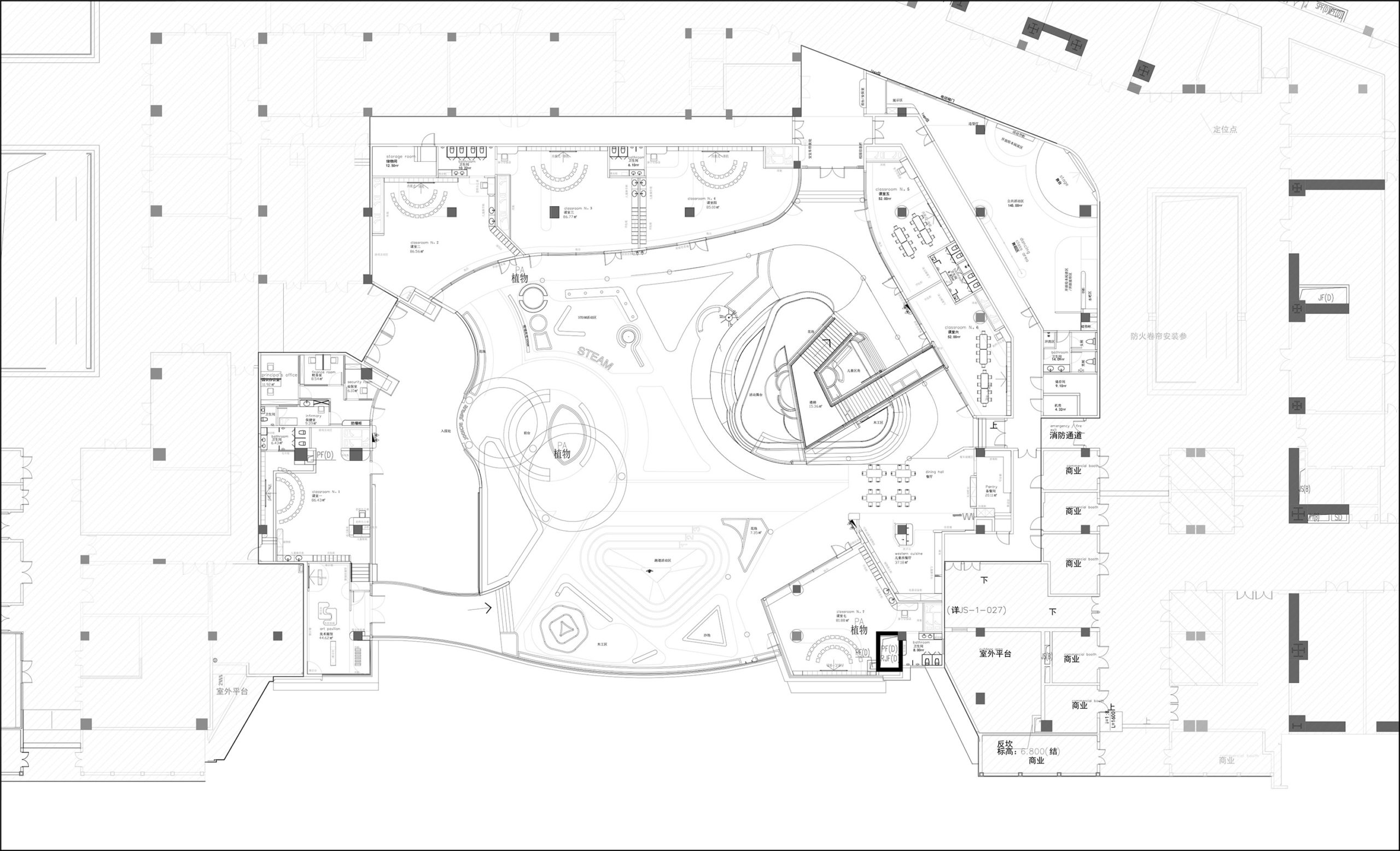 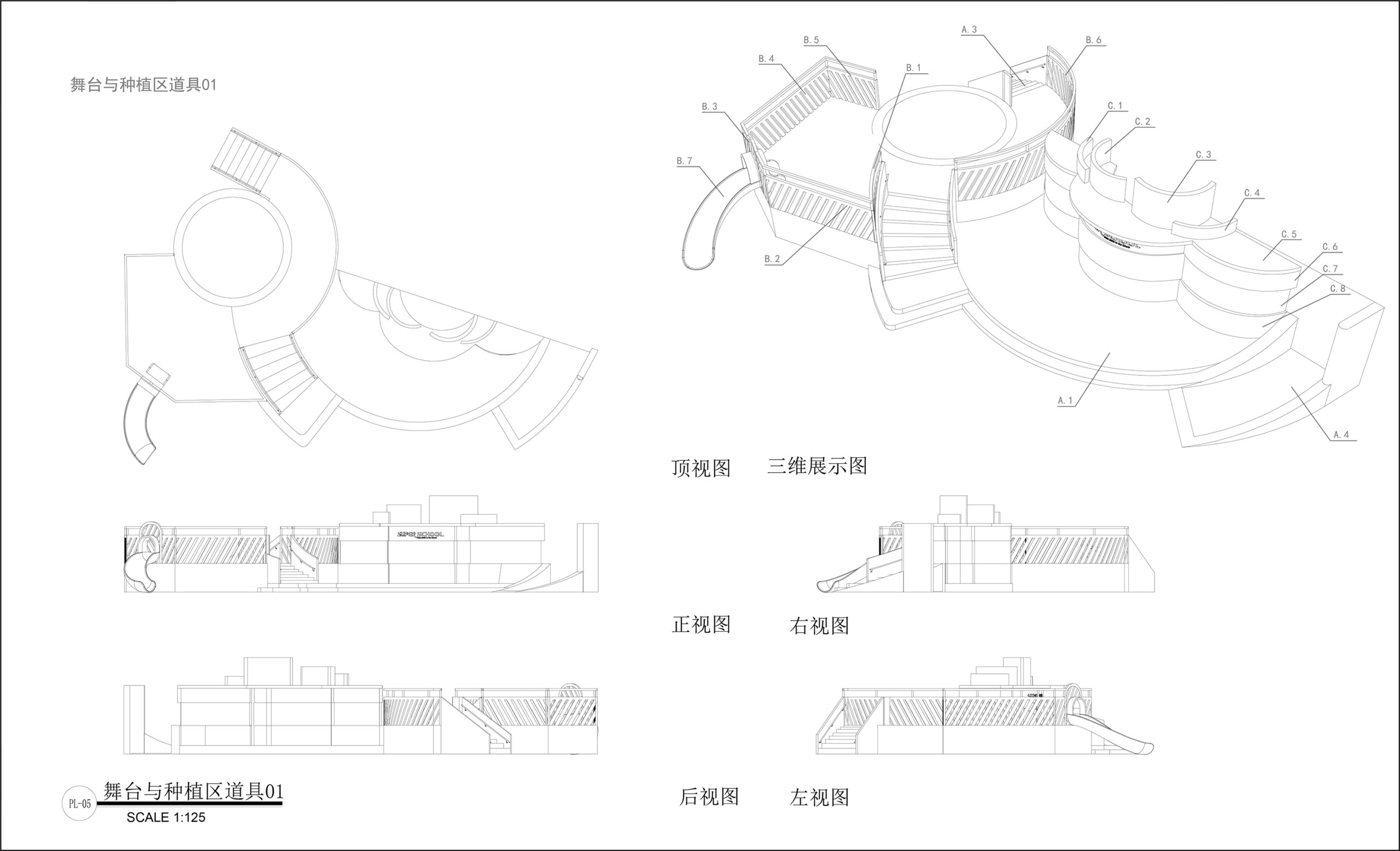 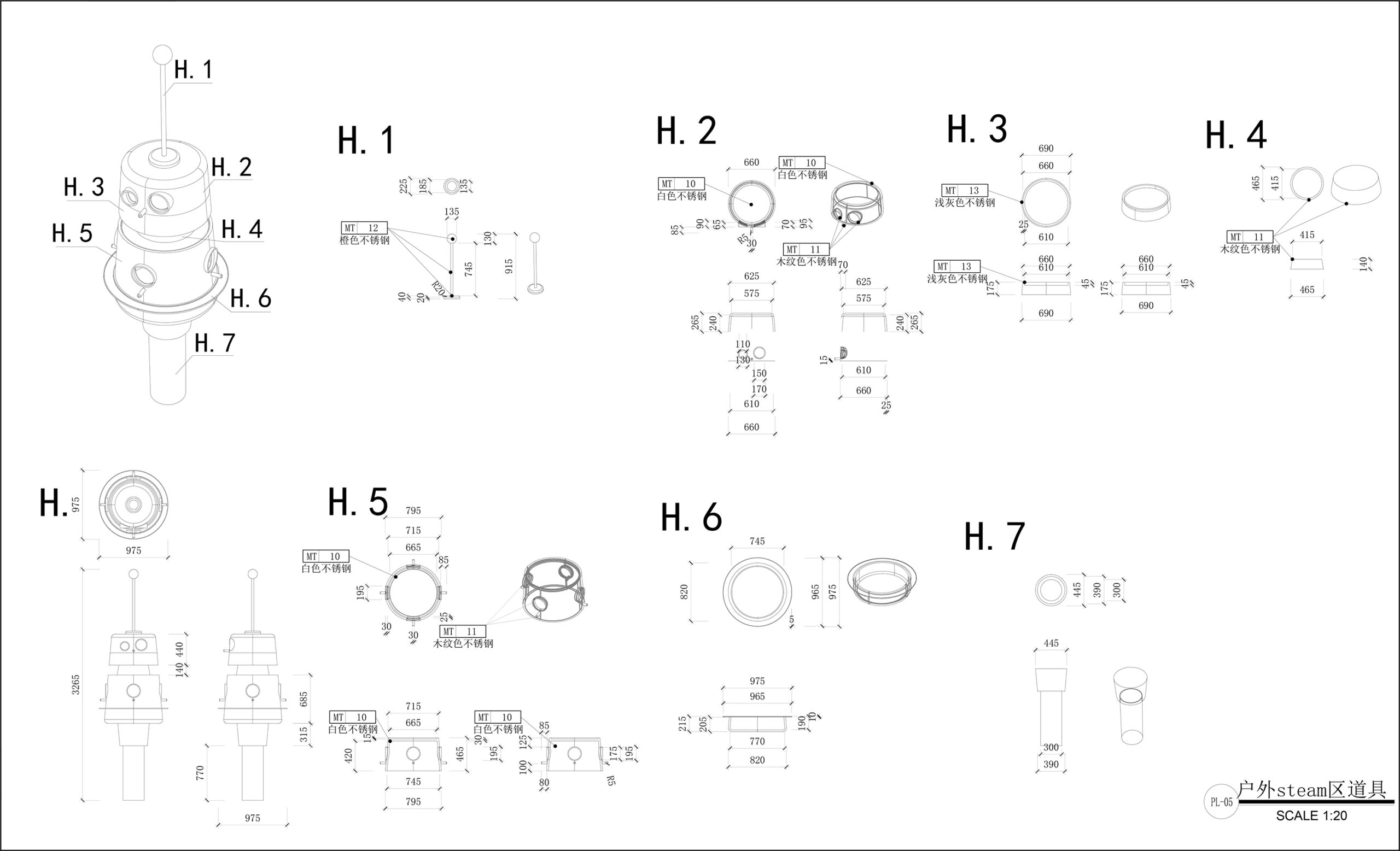