The innovative design of the crematorium by d6thD design studio evolves the underperforming space into a versatile place and encourages conversations on the uncomfortable topics of death, life and cremation.

Our fear and discomfort with death have left crematoriums with segregated, cold and depressing spaces in urban context so far. The architects were commissioned by a private trust to change such underperforming Hindu crematorium into a vital place at Amalsad town in Gujarat. The architect came up with the idea of creating a place that would not only fulfil cremation rituals but would also to make much needed valuable public space for daily use in the urban setting. 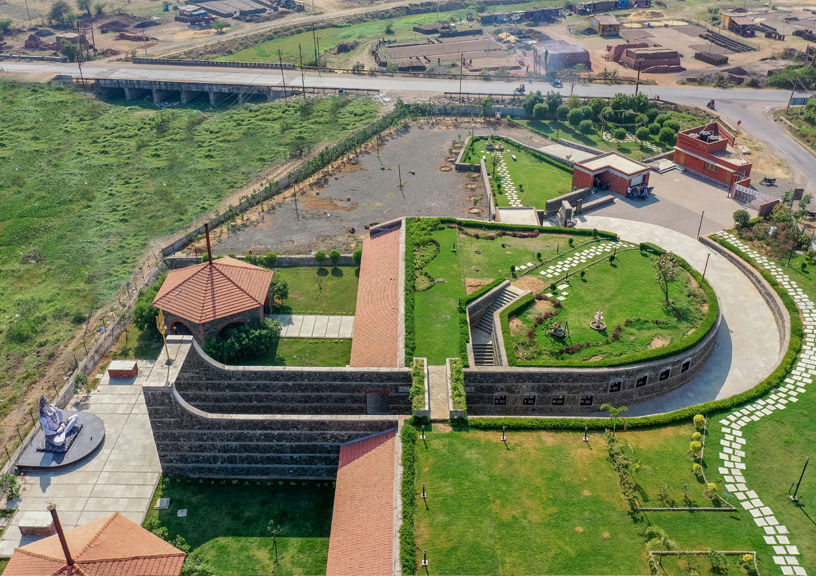 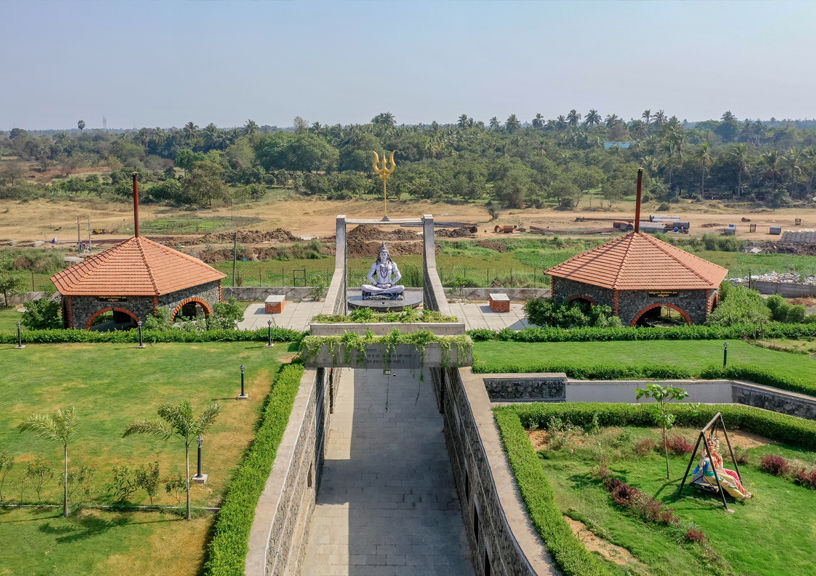 The Site and Entry: The 2-acre site has adjoining roads on the north and west sides, a small river on the south side and a few residences on the east side. The site had sloppy terrain of 5m going down from north to south-west. The architect strategically transformed half of the contoured site into two major levels—the upper level for public space and the lower level for cremation space—by cut and fill method. Both levels are connected by the ramp, which is considered the ceremonial path.

Upon arrival at the entrance plaza from the northern road, visitors are persuaded to slow down by the invisible building and offered multiple paths. However, the partly visible chimney and golden trident spark curiosity. A driveway ramp on the west side leads down to the parking area, and visitors can return back to the plaza shortly by using a staircase connecting the both. 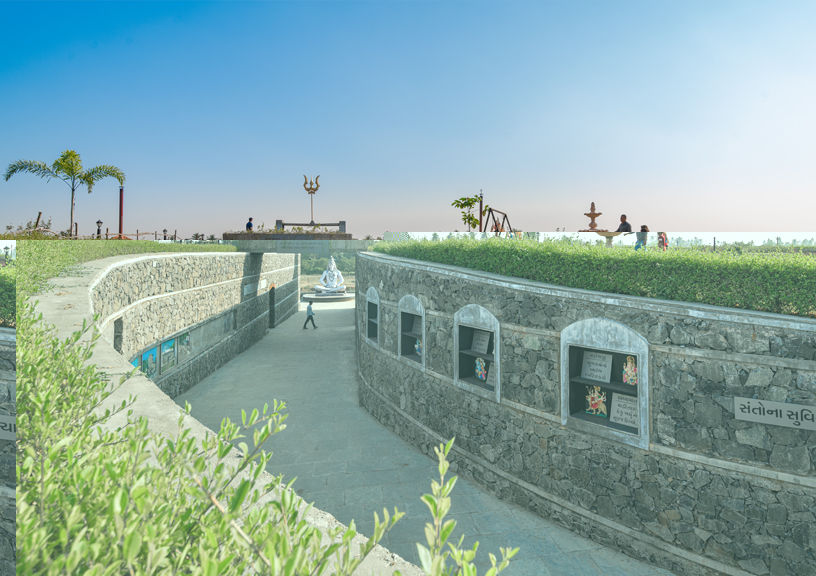 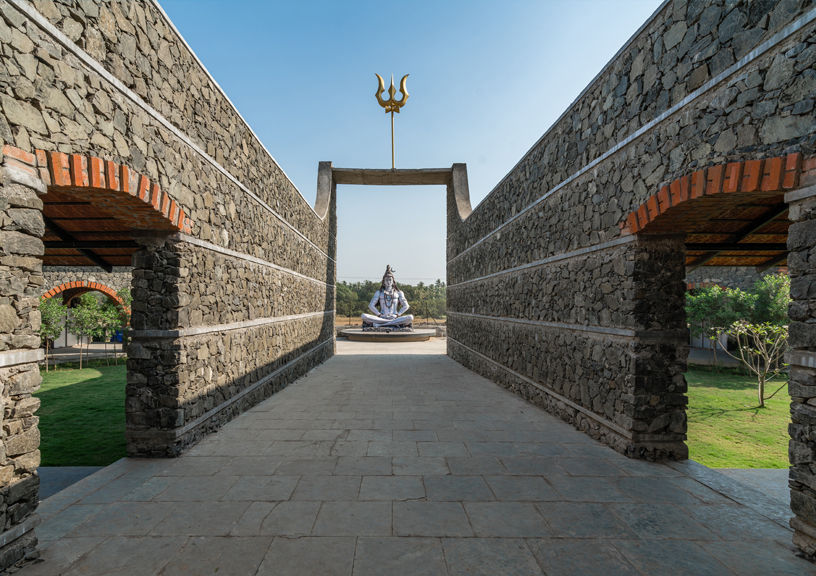 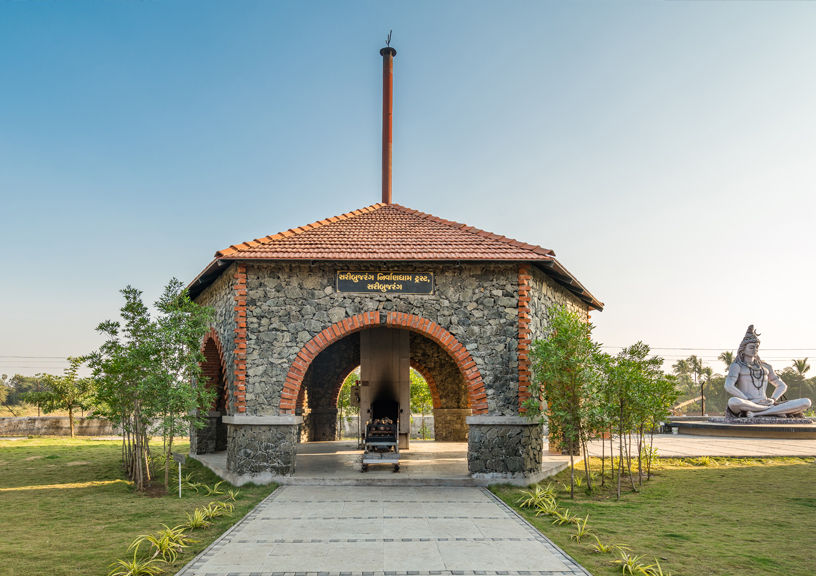 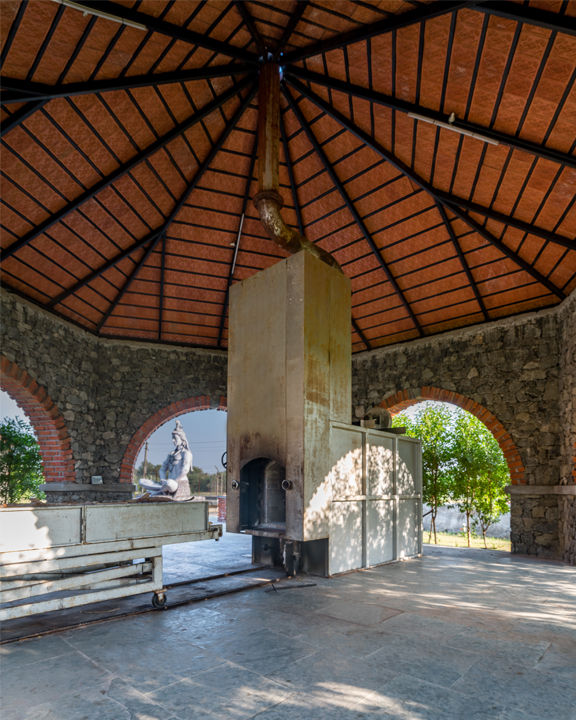 Spiritual Park: The upper level is fully landscaped with various spiritual gardens, acknowledging the fact that in the Indian context, society evolves around religion and such spaces often become more than just a place of devotion. Less conventionally, these spaces cater to all ages and genders regardless of the part of the crematorium complex; the upper level becomes a significant public space for socio-cultural engagement.

Nandivan and Sitavan on the lower west, while the children’s play area and Vrindavan on the upper east side of the entrance plaza help to disperse the public mass. A snake-shaped wavy pathway leading down to an aniconic shivlinga on the extreme east provides a buffer between the cremation courts and adjoining residential units. All these spaces designed for the daily use by locals are carefully blended with the landscape on various levels to honour the contoured site condition. 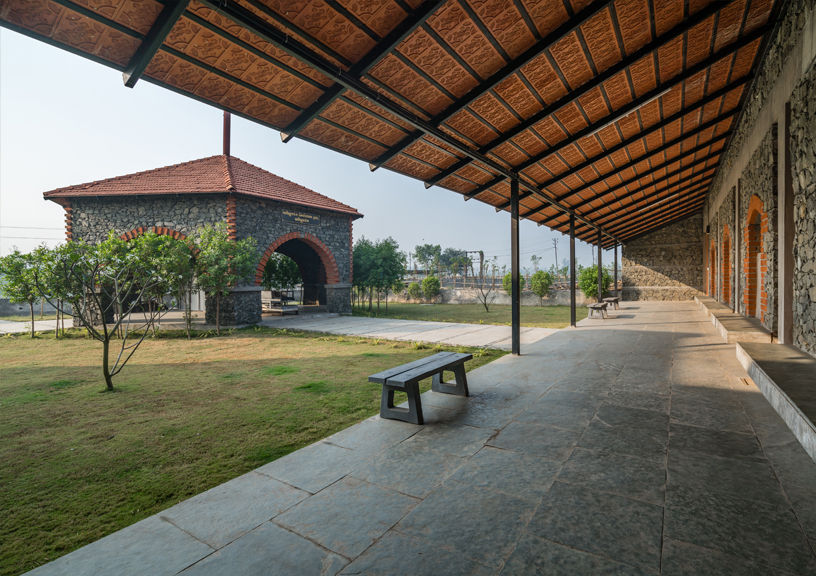 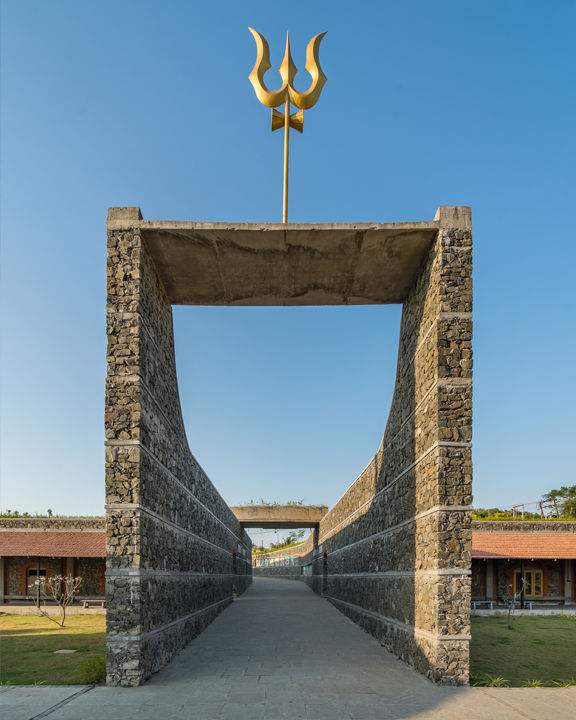 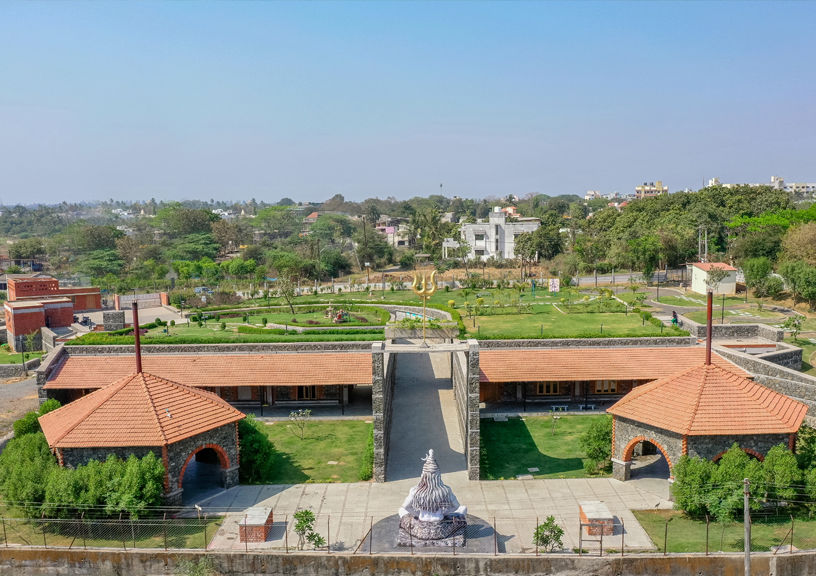 Ceremonial Path: The 5m-wide and 60m-long ramp (Muktimarg), peculiarly carved out of the contoured public park, takes mourners down from the entrance plaza to the hidden crematorium. As one goes down gradually, retaining walls create a shaft effect and solely focus on the funeral atmosphere. At the beginning of the ramp, retaining walls hold murals of different iconic structures of the local town (school, college, temple, market, railway station, etc) as a remembrance of the departed. Small idols of various Hindu saints and their quotes displayed in retaining wall niches create a pious atmosphere to calm the relatives of the deceased. 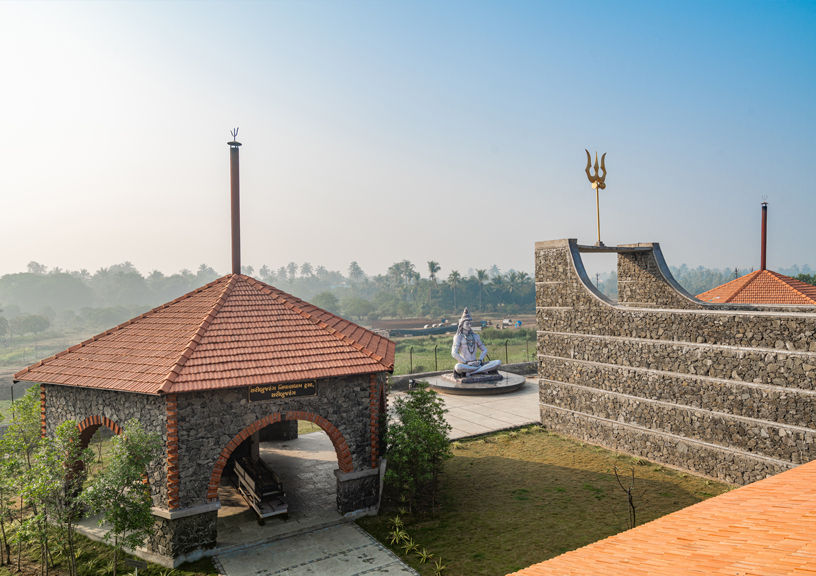 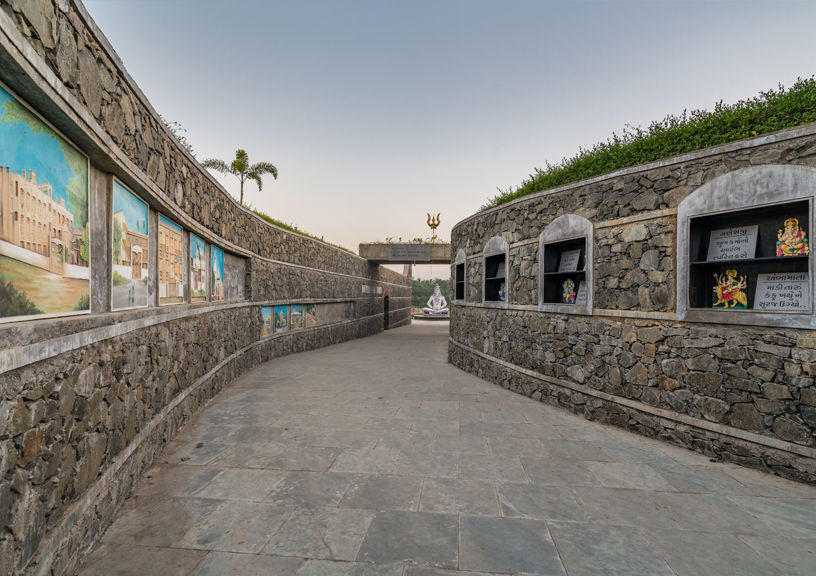 In the middle of the ramp, a bridge connecting two gardens on top with hanging creepers provides tranquillity. Continued planters on the top edge of retaining walls soften the visual impact and act as security fences for the gardens.

A further curvilinear ramp surprisingly reveals the grand Lord Shiva sculpture, which is not visible from the entry level. According to Hinduism, meditating Shiva in a crematorium speaks of aloofness from materialism and the constant understanding that one has to die and be reduced to ashes. It recognizes the world and encapsulates it in the philosophy of creation, sustenance and destruction– symbolized by Trishula. To accentuate this, Lord Shiva is visually framed with elevated stone walls and the slab has a golden trident at the end of the ramp.

This whole journey of the ramp encourages a gradual transition from the external environment to internal intimacy, from outer noise to inner silence and from dance of creation to the dust of death. 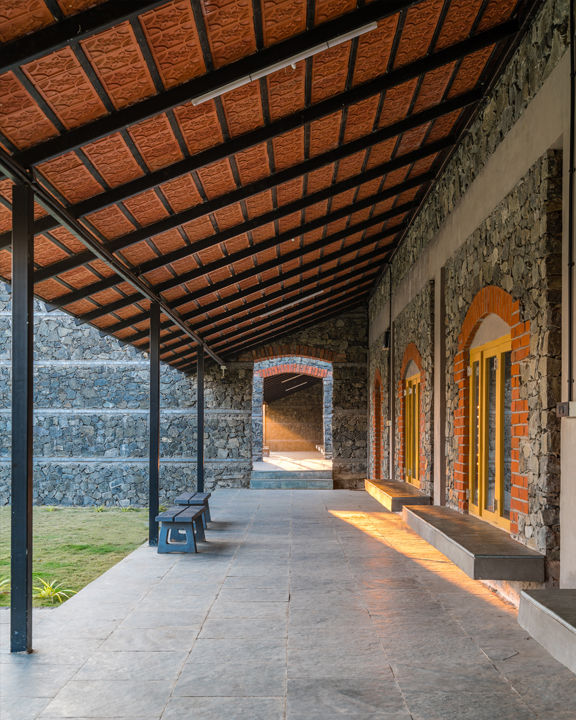 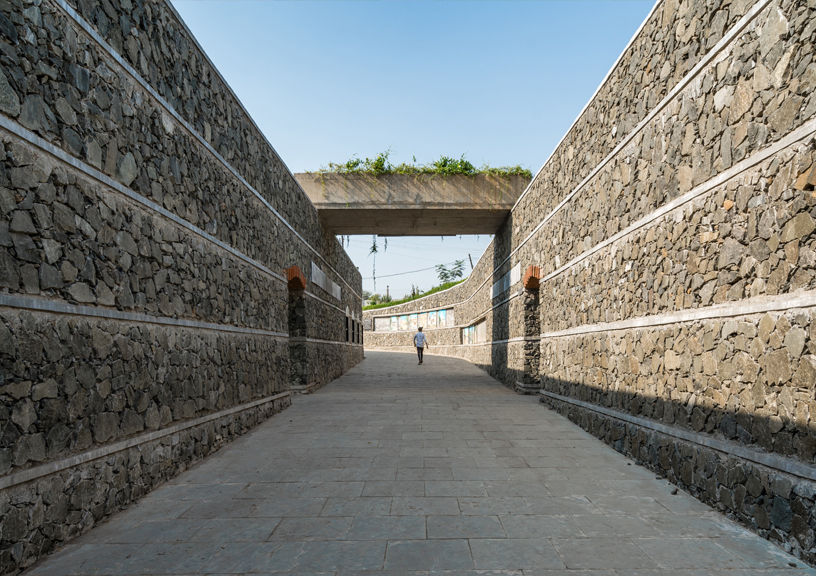 Cremation Space: Sunken courts at the lower level allow controlled relationship with the exterior, and thus, provide environments for reflection and remembrance. The hexagonal-shaped two cremation pyres are arranged in a symmetrical pattern separated by a ramp, giving the possibility of two funerals at the same time with a sense of privacy. 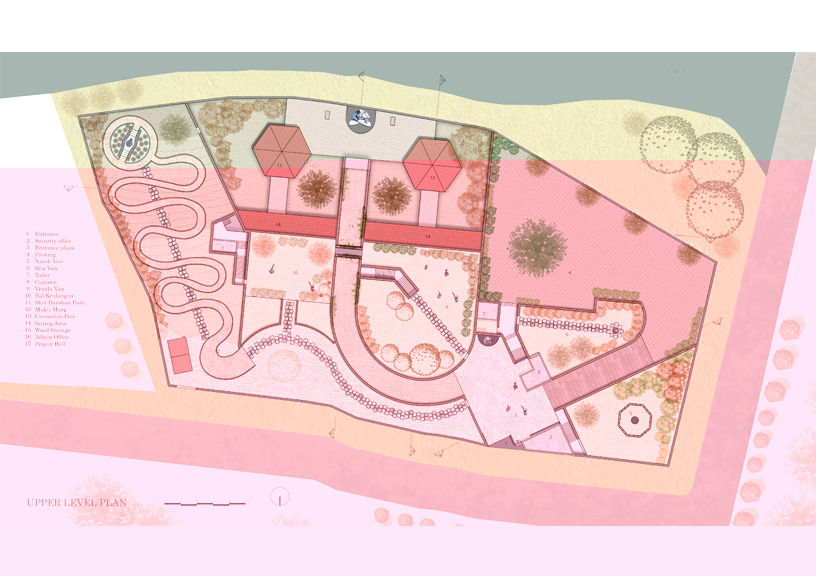 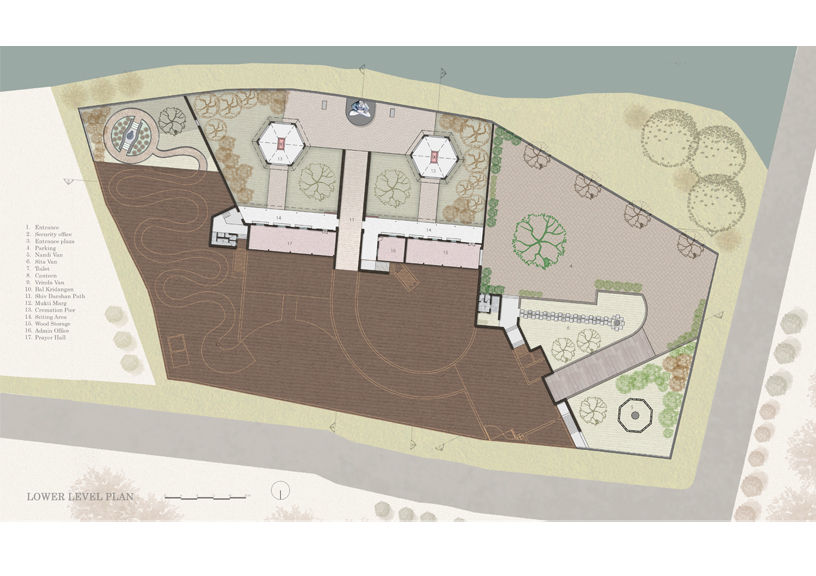 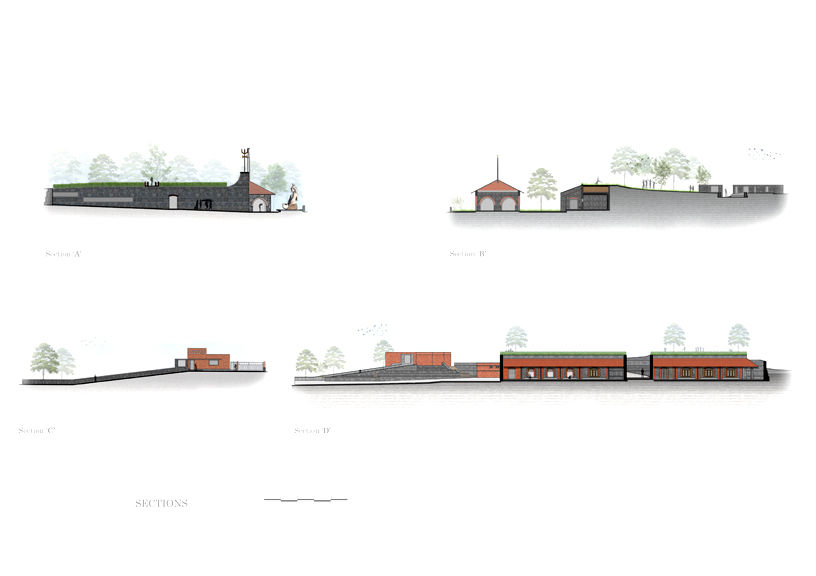 The admin office, prayer hall and wood storage building are buried such that their rooftop becomes an extension of the public garden, and maintains minimal visual impact. These subterranean facilities are accessible from wide corridors opening to cremation courts. These semi-open spaces become waiting areas where relatives assemble for a shared sense of loss during the cremation process. Staircases from the waiting area become direct exit to the landscaped garden on the upper level, avoiding embarrassing encounters between two different families.

Use of locally available random rubble stones and terracotta roofing tiles not only instils a muted environment but is also cost-effective and time-tested.

The project encourages visitors to explore the different spaces and interpret their purpose through their own experiences and needs. By realizing death as a motivating element to focus on the meaning of life on both a personal and social level, this unique crematorium becomes an important public space for the town as well as the surrounding villages. 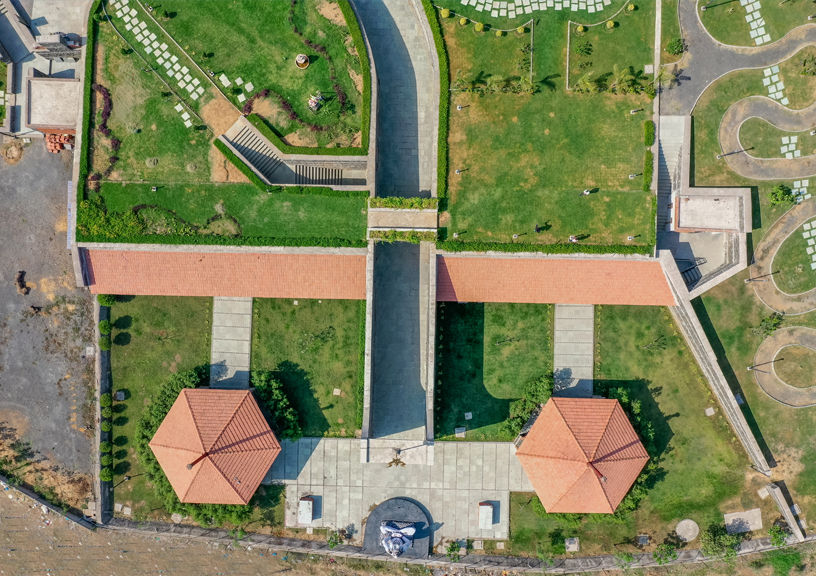 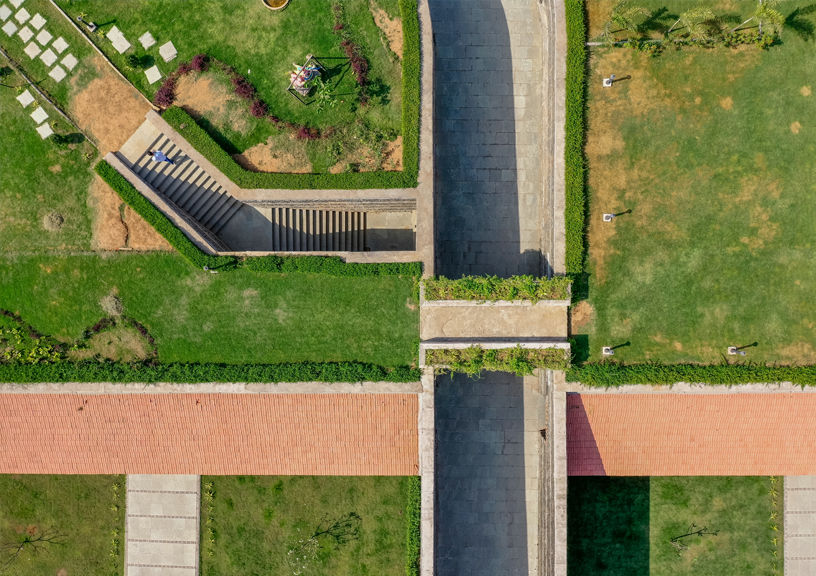