An open dialogue in which the new and old coexist, this project is a conscious attempt to defy the expectations from a yoga studio and an art gallery in the conventional design sense

Within the European context, yoga like architecture often succumbs to false preconceptions. The idea for the Yoga Garden and Art Gallery in Brno was thus to avoid such preconceived notions and create a space sans the deceitfulness of nostalgia or the exotic cliche of spirituality. The architecture for it is the result of a search for a natural and, at the same time, an abstract space. 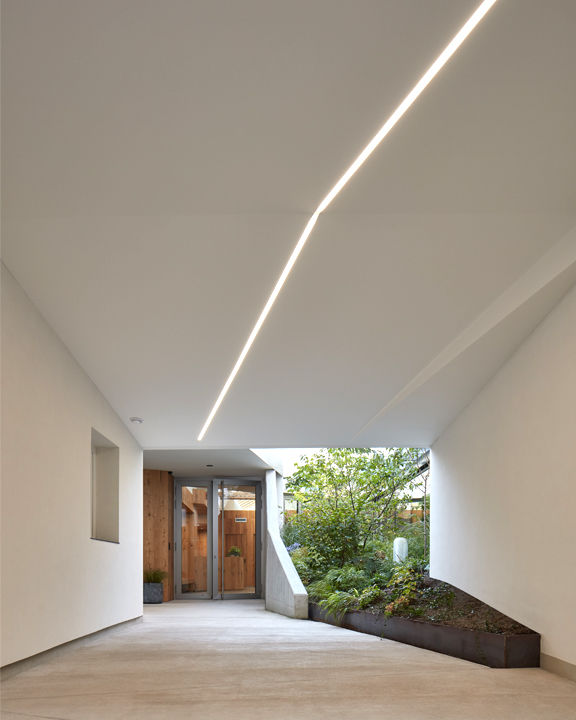 The original building was a post-industrial structure within a historical block development, a severed fragment of a former whole. A fragment in which certain traces of the past were visible, others hidden and still others entirely forgotten. All of these traces were interesting, and could have become the initial point of departure for the project. However, the architects decided on a different manner of radical intervention—without fear, but with respect for the old. The result was not intentionally determined in advance, but was the culmination of individual decisions.

Wherever the existing building obstructed the design process, it was decimated and transformed. Fragments of it were demolished to create new gardens, pillars were torn down to enlarge the space, and the innards were ripped out to lend the freedom for creating something new. The existing elements that were in accordance with the architects’ vision were incorporated into the project. For instance, the old skylights were merely renovated and the construction beams and timbering were carefully cleaned. However, all the traces of wear and tear were left as such. Some of the plasters in the interior were only partially cleaned, and still show signs of the original damage. The process was an open dialogue in which the new dares to be new, while the old dares to be old. The aim was to create an expansive space full of light, and simultaneously full of subtle connections between the individual fragments of the interior. The entrance area can be seen from the gallery, followed by the greenery of the garden, and in the next plan people practising yoga. In a similar manner, an attempt was made to interconnect the interior with the world around it, to feel the city of which we are a part. We can see fragments of buildings, trees and the sky, while at the same time the space provides us with the option of easily forgetting them and concentrating on ourselves.

In a number of places the original brick constructions of the pillars and walls, the wooden beams and frames have been strengthened with new reinforced concrete and steel constructions, bringing a contemporary aesthetic to the building and also infusing the resulting space with an almost abstract lightness. Two new atria have been incorporated into the design of the building, with greenery designed by the garden architect Mirka Svorová. The first atrium surprises visitors with its contrast between the confined, articulated space of the entrance corridor and the open gardens full of light. The rear atrium is an autonomous microcosm. It becomes a background, a scenography for the main hall—an image that changes according to the season of the year. 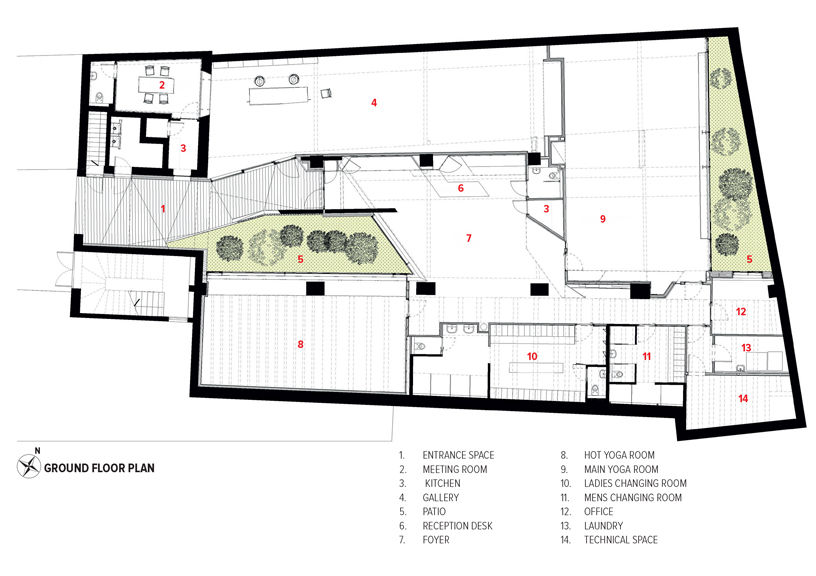 One of the fundamental values of the Yoga Garden is “sustainable growth and minimising the impacts of our society on the environment.” The architects have attempted to apply the investor’s approach here within the project. The gardens hold rainwater, and thanks to their low-tech design they do not require watering—the accumulation layer retains water, which is sufficient for sustaining the vegetation.

As architects, we have to face the challenges of today, both climatic and socio-cultural. It is a  conviction that architecture functions most strongly on a subconscious level. The subtle, almost abstract undermining of the given is our way of learning to live in a state of subconscious uncertainty—an essential skill for embracing the contemporary ‘liquid’ world. The architectural example of an attempt to introduce such a delicate uncertainty can be found in the main hall, where following the demolition of the concrete pillar a wooden binding beam ‘levitates’ in its incredible length, as if it wished to defy gravity, which is further accentuated by its crossing with a strip of LED light.