A few years ago, this was a site littered with the remnants of several demolished buildings. Today, it features a striking rammed earth residence for a family of six. Nestled in a quaint township in Kerala and built on a slope, the Debris House maximises the given area the building is in by sporting multiple levels.

There is a lot of potential in arriving at the design sensibilities of small urban and suburban homes for clients who approach architects with limited budgets and elaborate plans. Houses are aspirational investments for many in the developing suburban landscape of India, sometimes demanding a lifetime worth of savings from the clients. Very different from weekend homes, these houses have become prototypes in themselves and act as pivots for the lives of the inhabitants.The Debris House employs recycled and eco-sensitive materials in its making, while ensuring that the limitations of the materials are overcome and an expressive architecture is allowed to emerge from the constraints. The debris wall is built over a discovered foundation and with materials that are recycled from the site. The coconut shell filler slab enables the architect to reduce the use of concrete in the same. The small courtyard ensures ventilation and the windows are made from scrap but with a certain careful detailing. While the house uses numerous alternate technologies, there is a certain whimsy and playfulness in its design. The levels of the site are explored for connections within, and the house maintains a scale with sensitivity towards the neighbourhood.

As urban influence spreads in smaller towns, many aspire for homes that often mimic the city, with the use of glass, concrete, steel and other urban materials dominating the imagery. By resisting this omnipresent phenomenon and generating an architecture that is modern yet responsive to the specific conditions of its context will perhaps enable these towns to find their unique language.

PROJECT TECHNOLOGY
Considering the local nuances and the economic constraints, the materials for this project were responsibly chosen. The walls rose up from the earth that was dug out within the site, while the debris from the earlier building was turned into a curvilinear wall that forms the central courtyard and becomes the central focus of the house. Called the Debris Wall, it ushers in the advent of a new technology. Recycled wood is used to create the furniture that derives its form from boxes and store lots of books for the client, who is a school teacher.

DEBRIS WALL The wall uses meshed (22 gauge chicken mesh) casing reinforced with 6mm bars at 2 feet intervals vertically and horizontally. Lump-sized debris mixed with 10% gravel, 5% cement and 5% manufactured sand with water, was slightly tamped in 2cm layers to form the set of walls defining the entrance. The debris wall consumes five times less energy than a fired brick wall. The embodied energy of a debris wall is 850 MJ/m3; on the other hand, the same for a country-fired brick wall is 4,501.25 MJ/m3.

FERRO CEMENT SHELLS The roof of the house is made of precast ferrocement shells lifted and placed in position manually. These wafer-like structures are steel reinforced arched shells with effective thickness of 1.5cm, and they can take the equal load of respective RCC slabs. Such a roof effectively reduces the overall cement consumption by 40% and steel consumption by 30%. These replace the RCC slabs in roofing as they are as strong as 1200 kg/m2. 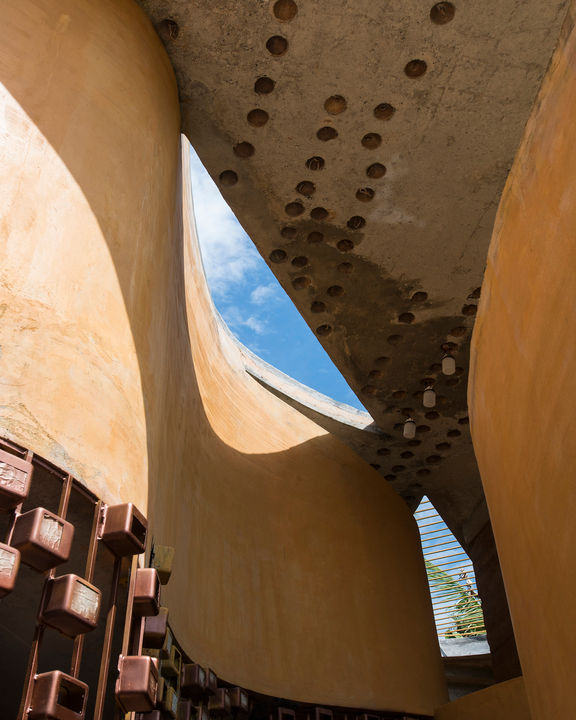 SPE CIAL FEATURES Other green initiatives include a rainwater harvesting and recycling system, and a responsive passive air circulation achieved through a careful planning of the courtyard and the facades. The windows protected with meter boxes from a local scrapyard create a mural on the rammed earth walls as the day goes by. Coconut shells used as fillers in the concrete roof give a contemporary touch to the structure. The latter half of the house incorporates ferrocement shell roofs. Within the local context, the project manages to stand out even while humbly maintaining its commitment to the society and the environment.

Text: Provided by the Architects