Connection of the interiors with the outdoors forms the core of the design philosophy of this residence renovation, which also plays with a modified elevation.

After his retirement from a government job at the coal mines of Ranchi, the client along with his wife decided to relocate to Pune. His wish was to use the 40-year-old house (G+1 storey) built by his father as his retirement home. However, having fallen into disrepair from being unused for a long period of time, the house had to be renovated. The client wanted to refurbish the ground floor and completely rework the building elevation, without disturbing the functionality of the spaces on the first floor. 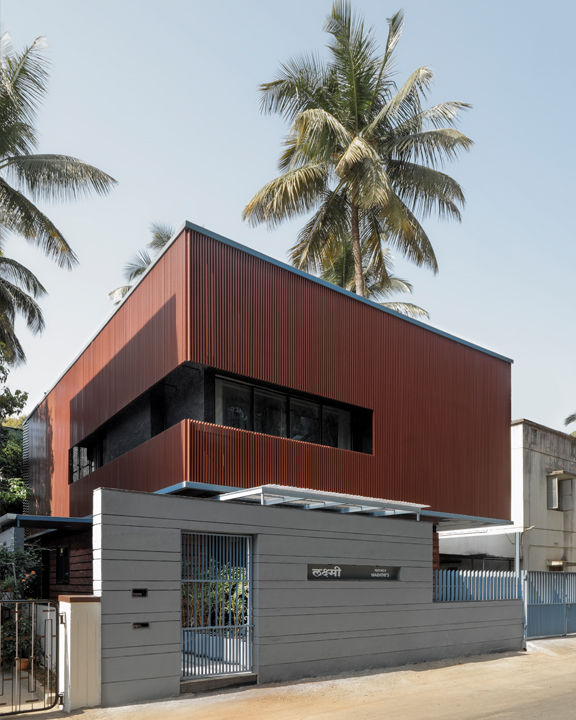 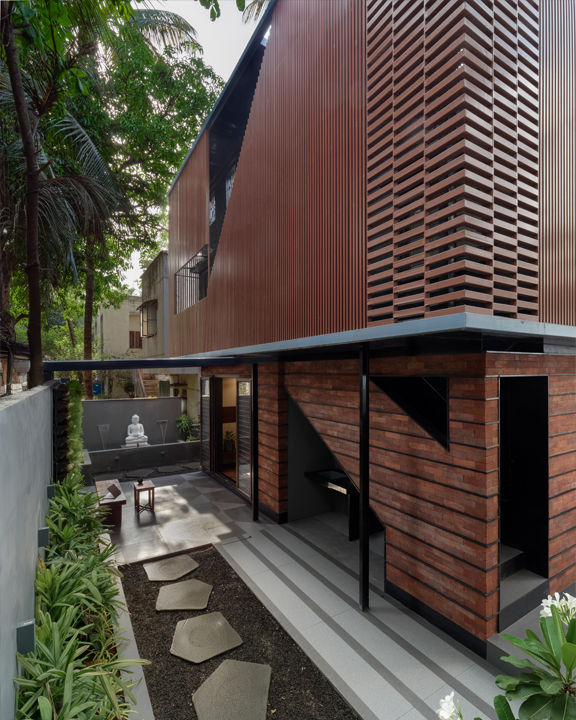 The idea was to keep the ground floor for the client’s daily use and the first floor—which had two bedrooms and other ancillary spaces—would be meant for their children or guests, whenever they visit them. The existing external staircase on the south side had to be retained. Working around this brief, the composition of the ground floor was modified without disturbing the structural framework. 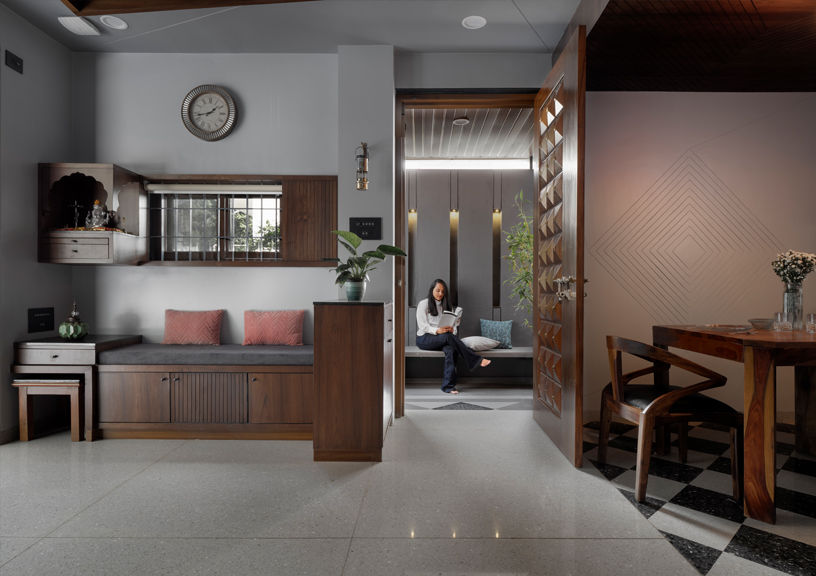 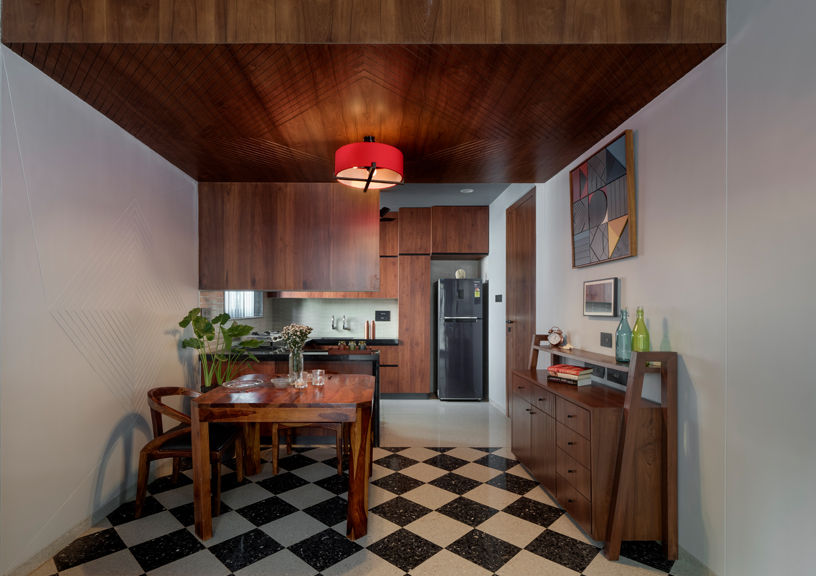 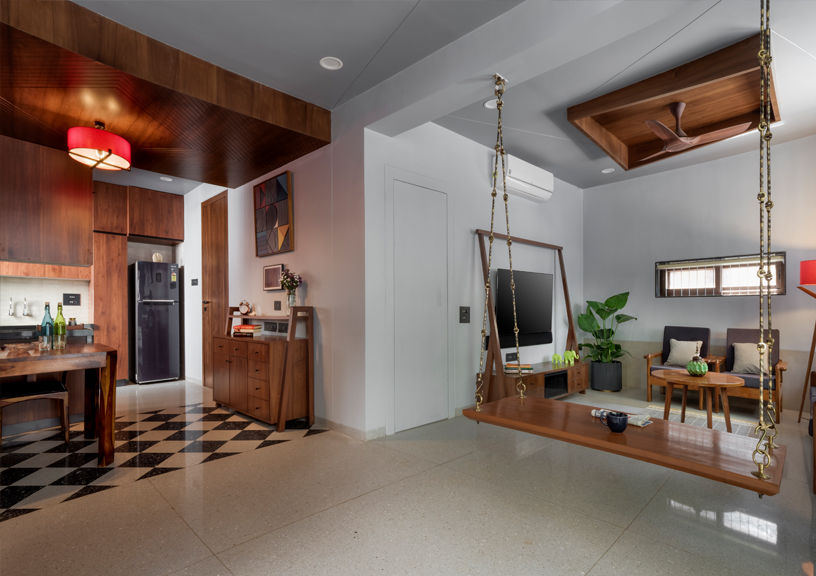 Connection of the interiors with the outdoor landscape (planned in the existing margins of the site) is the core of the design. The intent was to use landscape as a tool to overcome the limitations of the existing structure and establish a strong connection with nature. The living room and the bedroom have been opened up at strategic locations to achieve this. The feature walls in front of these openings act like anchor points for the entire landscape design. Additionally, they also double up as visual barriers and provide privacy to the user. 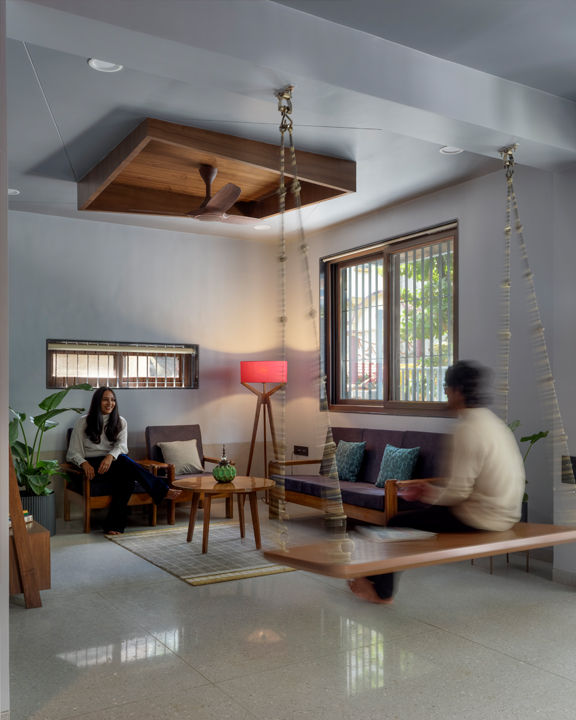 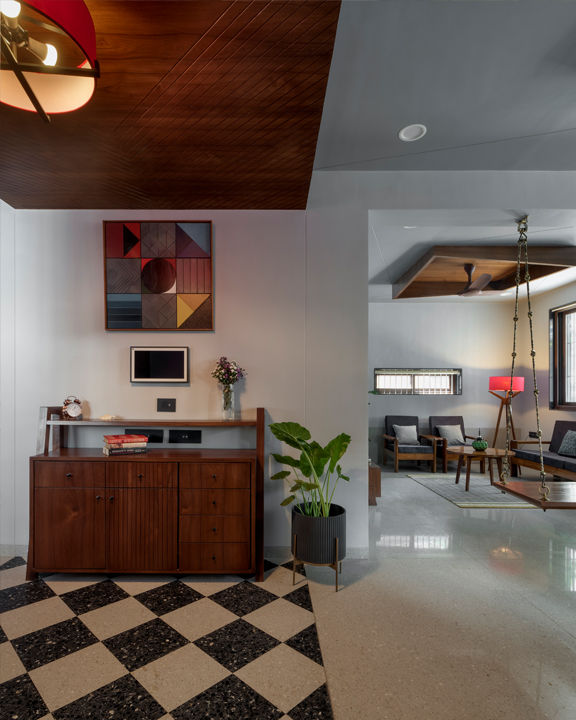 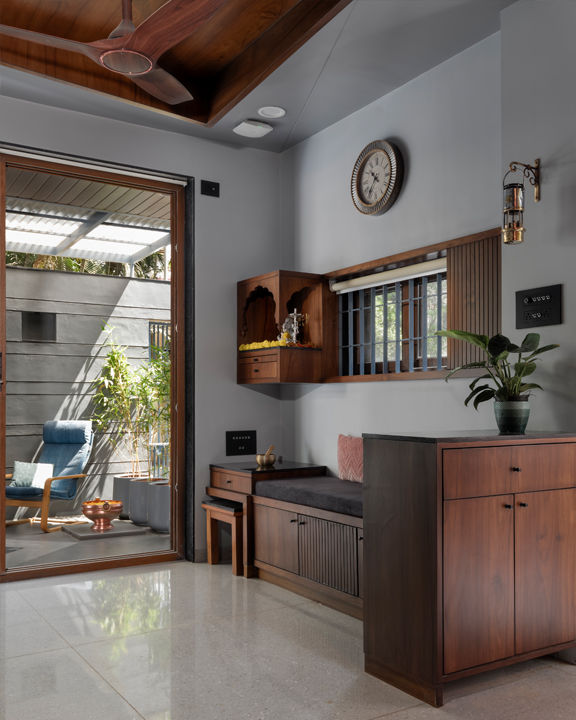 The USP of this project is the elevation design, which was an exercise of putting a new envelope around the old house without disturbing the functionality of the first floor. The challenge was to hide all the haphazard projections and offsets of the existing structure and give it a uniform look. The idea of having a perforated box made up of aluminium fins around the top floor originated from here. The ground floor is wrapped up in a brick skin that imparts a warm look to the house. In order to break the monotony, black stone slats have been introduced at regular intervals, which give the brick facade a horizontal linearity that complements the vertical linearity of the aluminium fins at the top level. 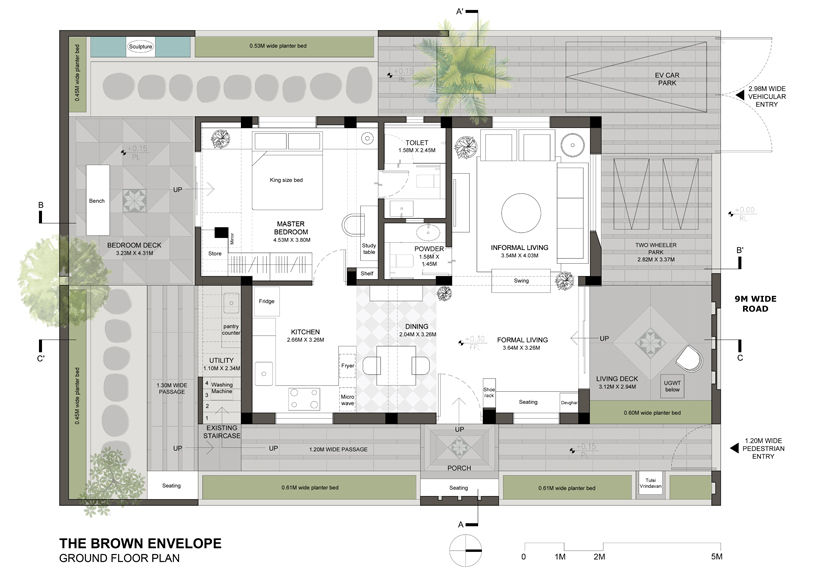 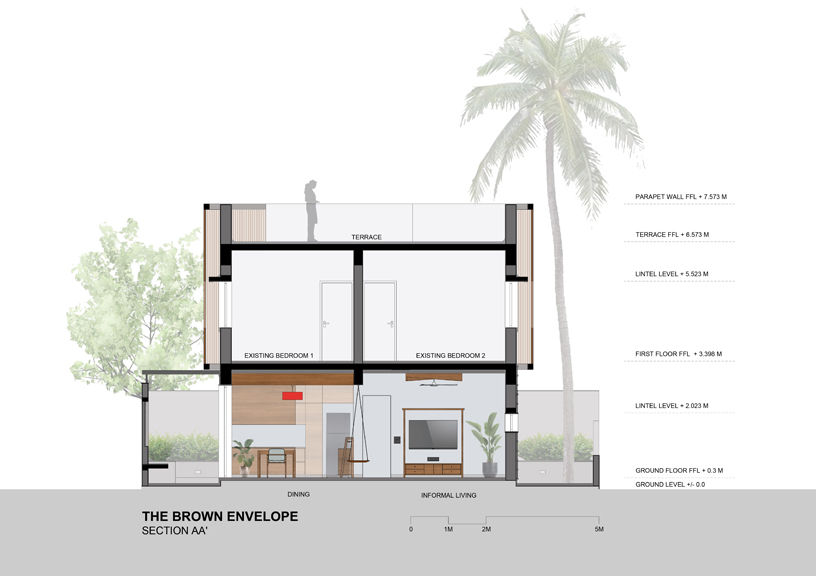 The modified elevation is a deliberate juxtaposition of different materials at different levels. The ground floor is treated with earthy and natural materials, namely brick and stone to keep the structure grounded in the site; whereas the first floor is conceived as a porous box made up of aluminium and steel, which not just aids in concealing the old facade but also makes it light in weight. 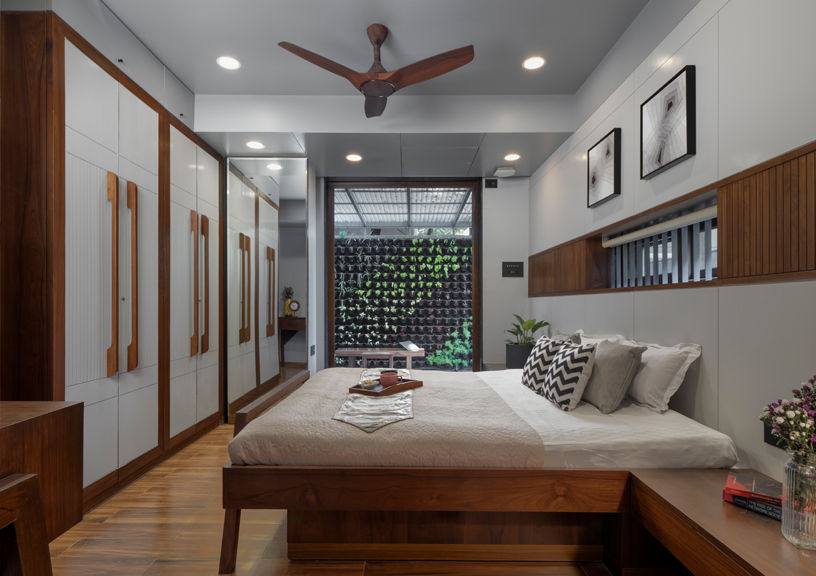 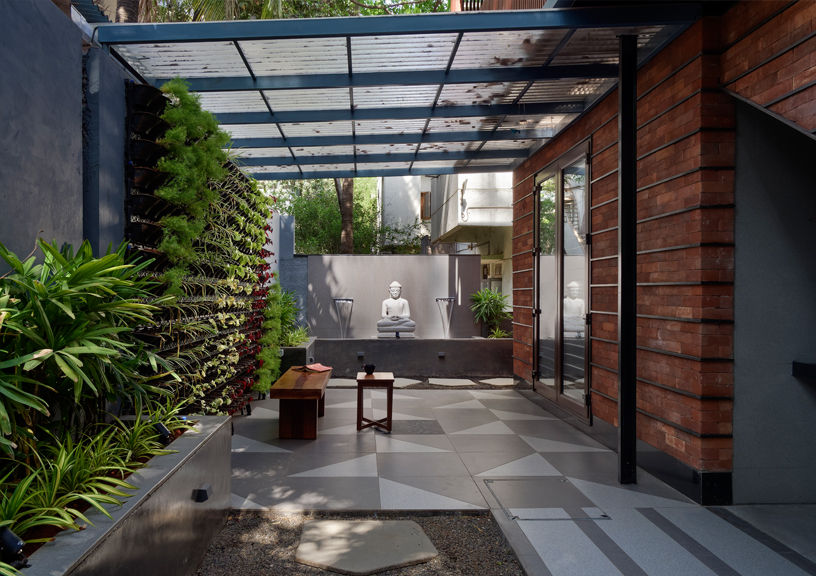 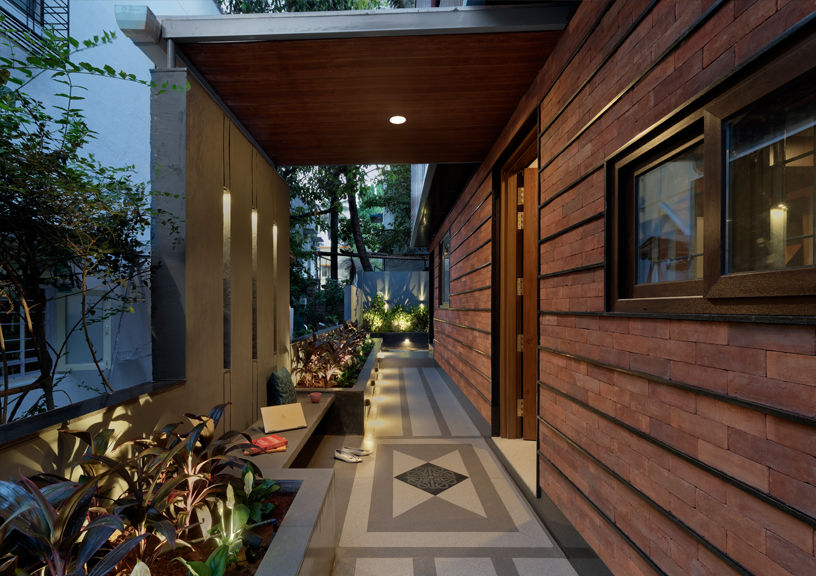 The entire landscape design has been planned in different shades of grey so as to accentuate the building facade. The outdoor flooring design—a combination of light grey and dark grey stone slabs—has been planned in two parts. The flooring in front of the feature walls has a geometric pattern consisting of diamonds and triangles to highlight their importance as ‘pause points’, whereas the rest of the areas have a linear pattern that impart a sense of movement. The central portion of the flooring of all the ‘pause points’ has a floral motif, which represents the traditional Indian rangoli design. 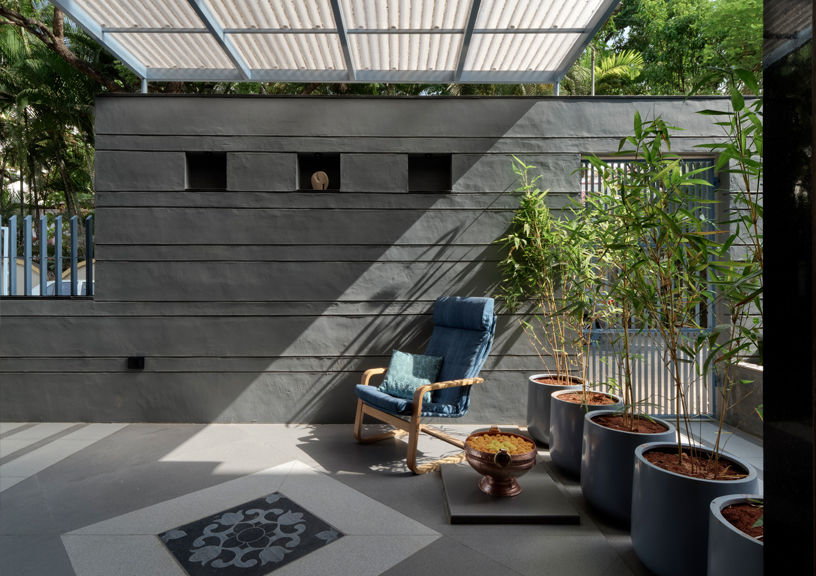 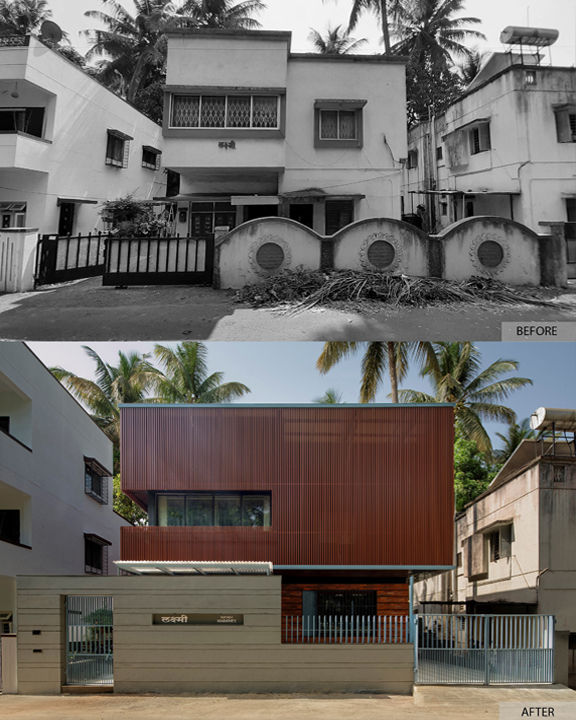 The brown and grey colour palette of the exteriors has been continued in the interiors as well. The entire furniture has a teakwood finish, whereas the walls and ceiling have been painted in light grey and dark grey respectively. The usage of beige colour terrazzo flooring provides an appropriate background for the furniture pieces, paintings, etc. Just like the outdoor landscape, usage of diamond shape is an important feature of the interior design. It is evident in the design of the dining area, ceiling of the living room and the main door.