Mindfully designed and filled with gardens to bring a sense of calm, the Maggie’s Centre in Leeds extends the charity’s vision of offering support to cancer patients and their near and dear ones

Maggie’s Centres are places where people with cancer, as well as their friends and families, can go to find free practical and emotional support. They follow the approach to care as set out by Scottish writer, artist and garden designer Maggie Keswick Jencks—a belief that people should not “lose the joy of living in the fear of dying”. Heatherwick Studio was commissioned to design a new centre at St James’s University Hospital in Leeds. Jimmy’s, as it is known locally, is Europe’s largest teaching hospital and home to the Leeds Cancer Centre, which serves a diverse community across Yorkshire. The hospital staff had been working to improve the experience for patients—bringing a piano into the Bexley Wing, for example, and hanging paintings from the city gallery. The studio wanted to support this by providing further respite from the clinical environment. The brief was to create “a home that people wouldn’t dare build for themselves” to welcome an expected 110 visitors each day. 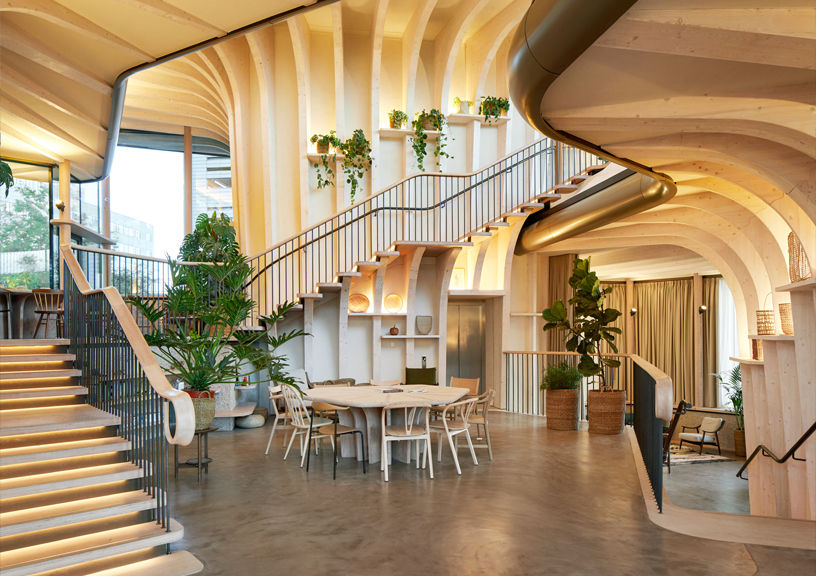 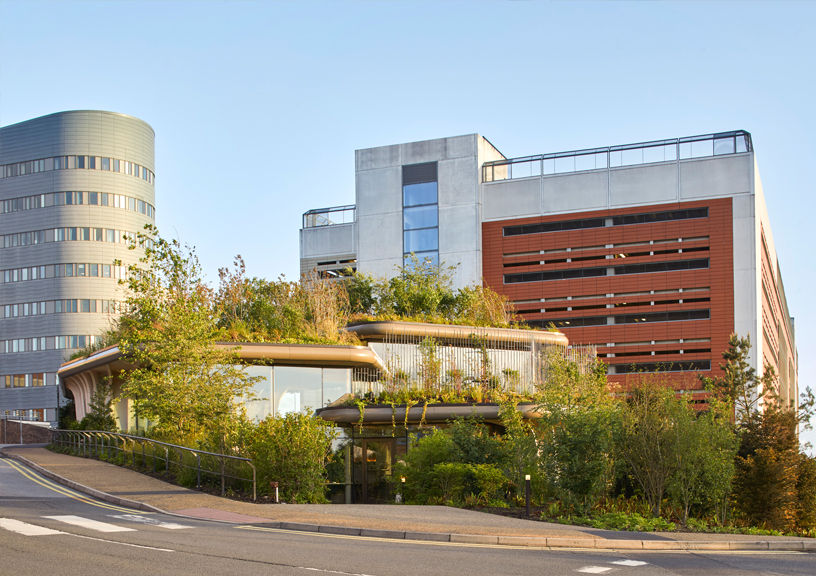 The site chosen for the new centre was the last patch of greenery at the hospital—a grassy hill next to the car park, bounded by roads on two sides and surrounded by large buildings. The six metre difference in level across the site would typically dictate a building dug into the slope. Instead, the studio chose to follow its natural contours, so that at the highest point, visitors would have views of the Yorkshire Dales and a connection with the world beyond the hospital.

The pillars of support at Maggie’s are the counselling rooms. These were placed like three pavilions organised around a heart and at changing levels of the slope. The space between them accommodates the common areas of the centre, resulting in an inviting open space, simple for visitors to navigate, connecting all the areas to the garden. Externally, this gives the building a different character from every angle. Two entrances were also created: A front door and a rear entrance for staff and regular visitors. The challenge was to span and enclose the level changes and reinstate the greenery. Instead of a single monolithic canopy, the roof is composed of three overlapping gardens that step down and overhang to shelter communal areas. In this way, the hospital does not lose its last green space—instead, it is lifted up, filled with woodland plants and made more accessible and inviting. 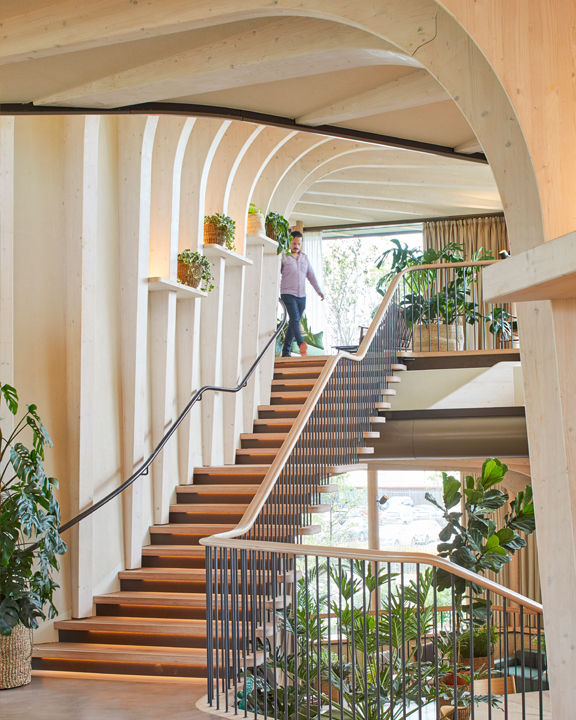 The relationship between the centre’s architecture and the experience for visitors extends beyond the uplifting effect of its garden. The front door, for example, is a psychological threshold—the point at which someone might start to accept a cancer diagnosis. Not everyone will be ready to open the door straight away, so there is a bench to sit outside, or a private path to wander quietly through the gardens. The entrance wall is transparent and the door is moved to the side under a lower roof, where it is less intimidating.

Inside, visitors are not confronted by a conventional reception space; instead, they find a welcoming window seat, a noticeboard, and a view through to the heart of the centre, with its communal table in the arc of a staircase leading to the kitchen. The kitchen table, a feature of all Maggie’s Centres, represents another threshold—the point where visitors feel ready to share their experiences. Everything is on display, so there is no awkward rummaging through cupboards to find a mug, while a clerestory fills the space with natural light. Above this, there is a private space for the staff to rest and gather strength, and a sheltered roof garden accessible to all. 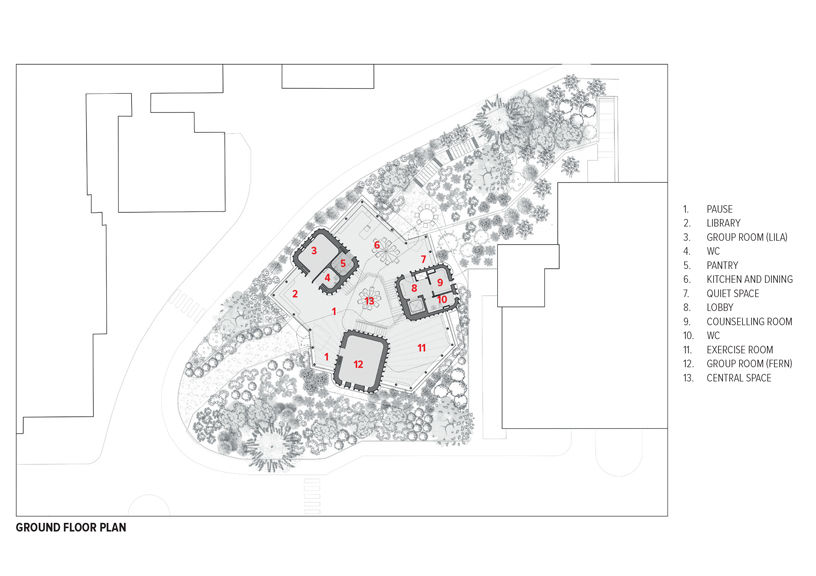 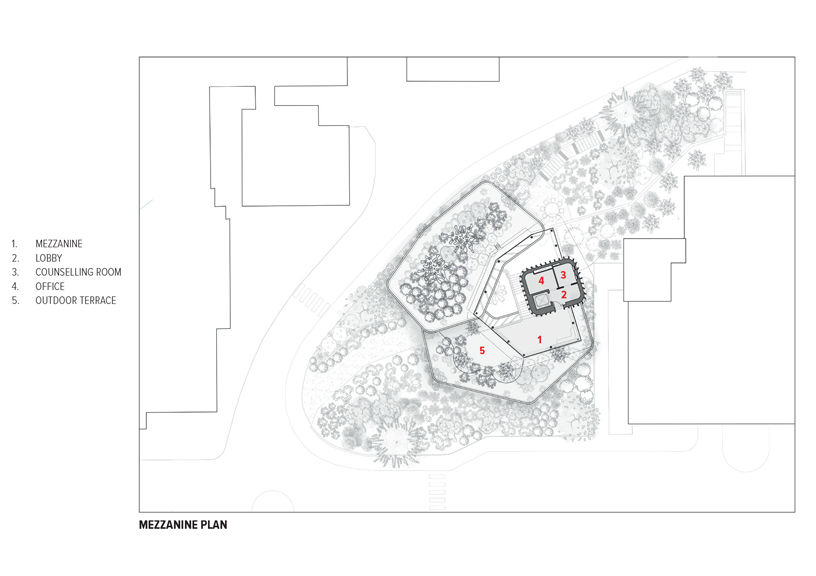 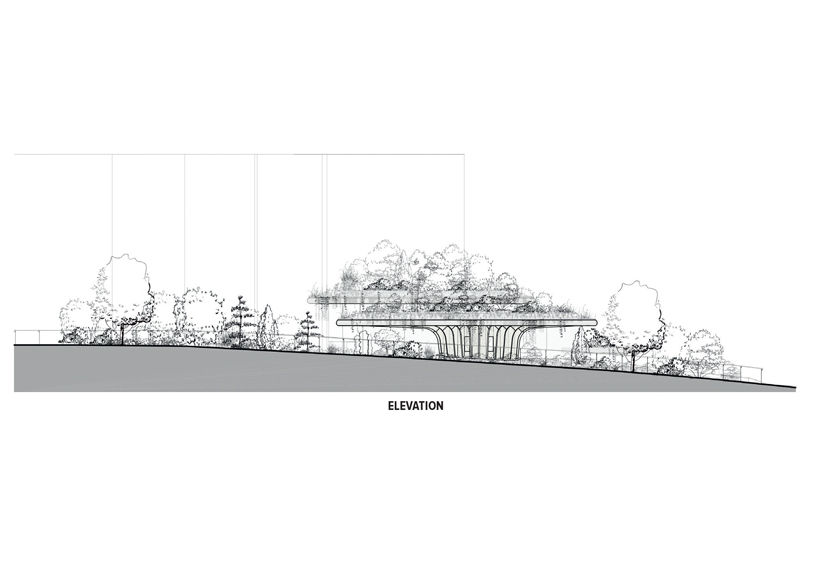 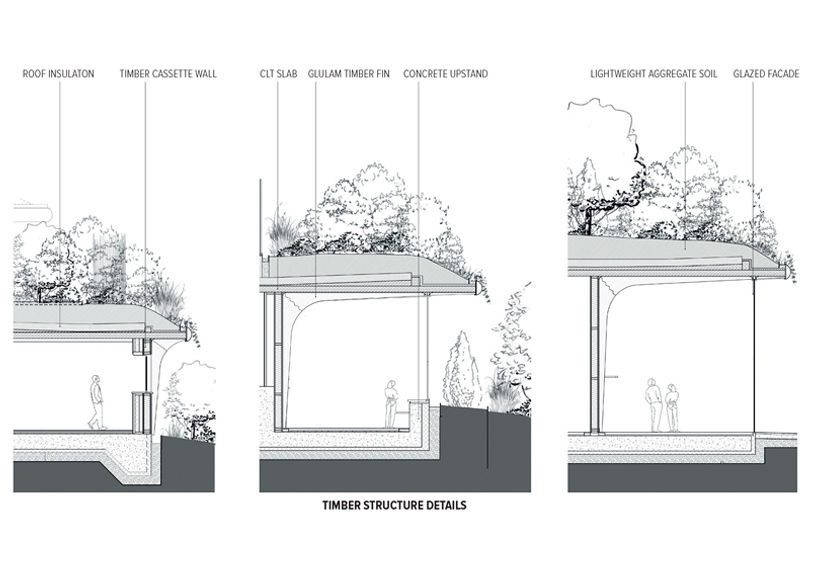 The road running along the site presented a challenge for the building’s construction—as the main ambulance route, it could not be disrupted by months of heavy vehicles. A structure was thus designed that could be built offsite and assembled quickly on a concrete slab while retaining the wall with minimal disruption. The entire building superstructure was manufactured in Switzerland and fixed together on site in just eight weeks. These are supported by glulam fins, whose modulations give the feeling of trunks rising up from the ground to support the gardens overhead. The structure is mostly made of sustainably forested spruce, a material that will expand and contract with the seasons, as if alive.

The studio looked at the qualities that make a building a home—the use of warm, natural materials, the way that objects are used to express individuality, the combination of private spaces and places where people can come together, and gentle lighting. Between the timber fins are shelves, lined, as you might at home, with nick-knacks, pot plants and other interesting things that people bring to the centre. When it came to lighting, wooden cores were used that could glow, as if emitting light. This is achieved by integrating the lighting with the shelves and interior edges of the roofs. The designers had to work backwards, specifying how the lights and services would be integrated at an early stage in the process, as the building was still taking shape. 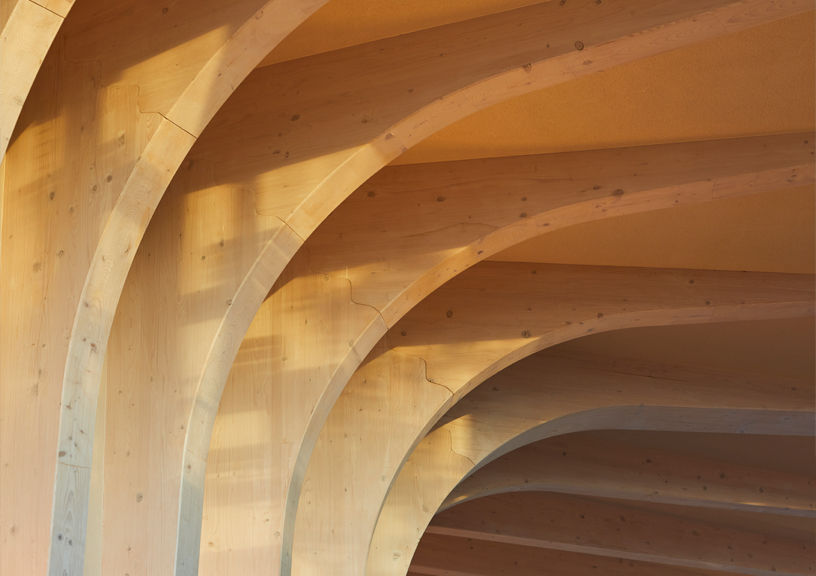 The studio worked with landscape designers, Balston Agius to develop the gardens. Given the shade cast on the site from adjacent buildings, the high winds and local weather, the planting is based on the British woodland, with hardy native species of plants that support the area’s existing biodiversity. The garden is deliberately lush—Maggie herself was a gardener, and understood how calming and restorative it could be to pick up one of the tools left for visitors and get to work.