The Stack by Step Red Zone Boarding House designed and built by Ismail Solehudin Architecture, an Indonesian based architecture studio displays a vibrant assembly of bright red facades effortlessly complemented by minimal material and shades on the interior.

The complex yet standout conceptualisation of the boarding house was closely interlinked to its function and location between multiple other residences, leading to an imagery of accruing houses assembled together. An initial comparative analysis between the most common typology using a double-loaded corridor system and the new ‘stack by step’ system lead to showing increased land effectiveness through the unconventional arrangement of stacking. Here, the central idea also then shifted to utilising and relooking at the spatial aspects and commons delivered by the staircases within the boarding complex.

This was also reflected from the comparative study where the double loaded system accounted for only about 25,6 m2 whereas the stack step system resulted in stair spaces amounting to approximately 31,2 m2. For these stairs to form and act as the one and only exclusive vertical and horizontal circulation area, human circulatory spaces were replaced and adjusted to enhance social activity and engagement. Therefore, the idea resulted in providing less floor area with the same number of units, in comparison to double-loaded corridors.

To enrich and excite residents within the boarding complex, the form attempts to follow a split-level arrangement that in-turn becomes sculptural formations along with the conscious decision of infusing bright shades of red as a prominent feature throughout the housing. Also, the material palette subtly amalgamates with a combination of bold textures from unfinished concrete, brick, pebble stones and green plantings throughout its interior spaces, comprising private rooms and common areas. The stacked mass formation along with the fragmented sloping roof intensifies the overall character of the building by allowing provisions for future expansion of rooms through the mezzanine under the roofs, followed by every unit grid below. 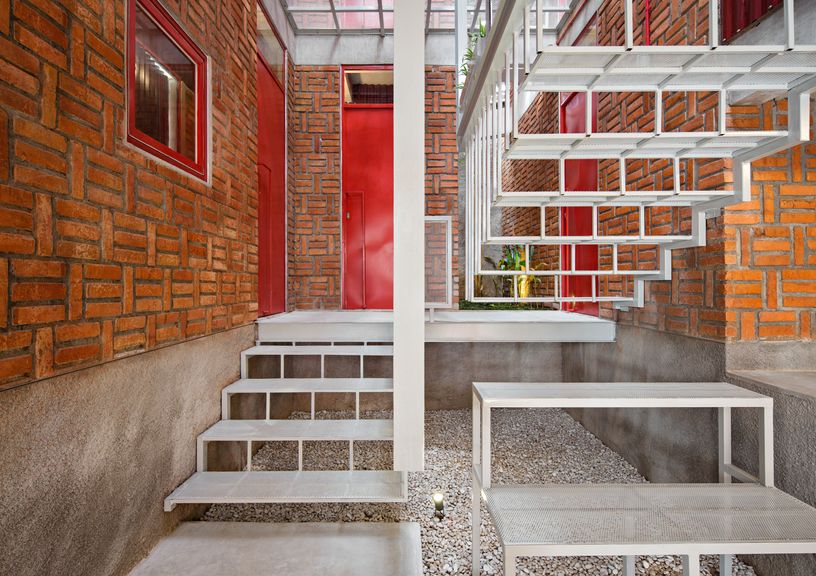 Further, stairs being the only access to the entire unit, they were sculpturally designed to act like a suspended structure formed out of iron and steel. The hanging structure accentuates the blended aesthetics between the warm shades of exposed brick and the metallic red wall through the movement of skylight and shadows through the footstep of the stairs. Consisting of steel perforated flat and square steel tubes attached to steel beams as seen throughout the stair construction, the roof and facade material is Zincalume-coated steel that has resulted in the overall lightness and reduction of load on the substructure.

Additionally and effectively the chosen materials have minimal maintenance and repair activity associated, while also responding effectively to the tropical climate conditions at which the boarding is being located. 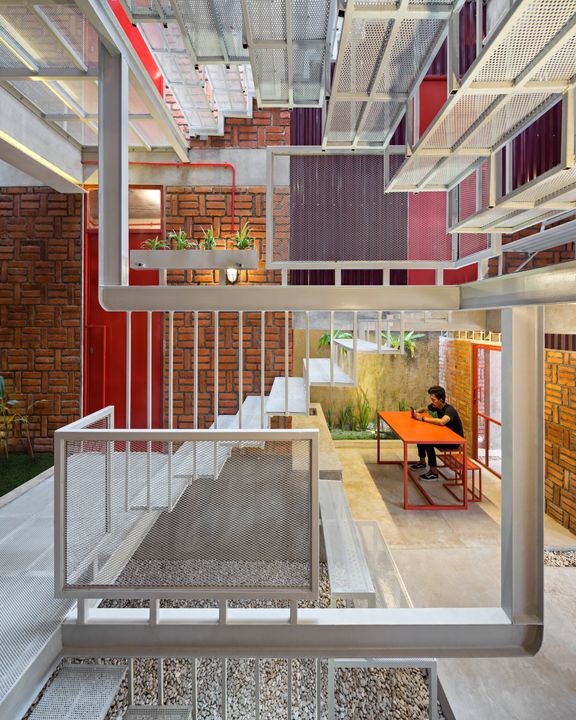