Adjaye Associates recently unveiled the images of Images of The Africa Institute in Sharjah, UAE at a virtual conference. Located in the Al Mankah neighbourhood, in close proximity to the Sharjah Architecture Triennial headquarters, the new African Institute is a novel idea committed to advanced study, research and documentation of Africa and the African dissemination throughout the Arab land.

45 years back, during the African and Arab relations Symposium (hosted by the Emirate of Sharjah) in 1976, the idea of The Africa Institute was first devised to focus on inter-relations between the two regions and cultures. However, the new 31,882-square-meter (or 343,175 SQFT) centre will be now housed on the location of the former building which was demolished previously in 2015. And in relation to its urban setting, the new design strives to conciliate with its adjacent buildings by acting as a single institution, linked together by a series of connected open courtyards attached to five high-rise buildings. 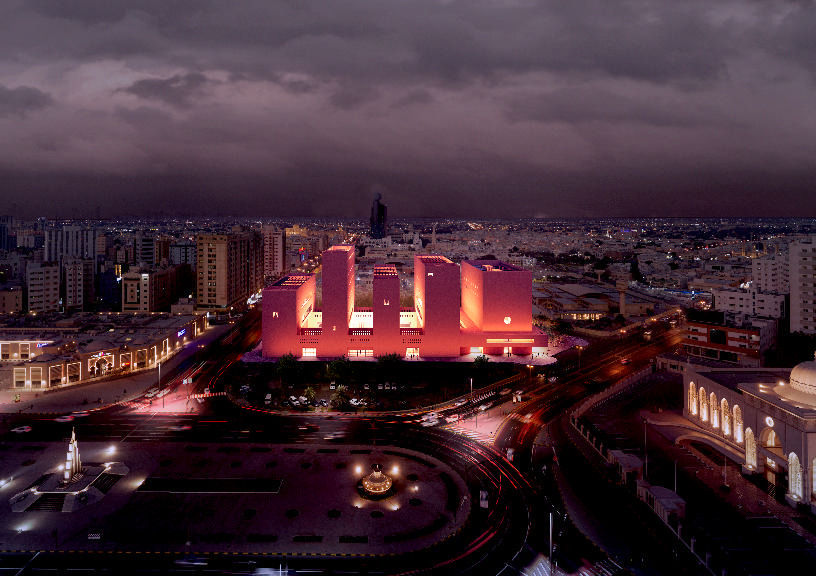 The built language demonstrates an influence and tribute to the local African culture while maintaining a high regard for the Arab context through the low carbon concrete structure that strengthens and responds to the desert environment. A coppery-red campus confined within the four wings between four and seven stories tends to apply stained concrete amalgamated with earth. The material palette used, therefore tries to infuse with the indigenous buildings of North Africa which were mainly built out of laterite soil and rock.  “I envision the new campus as a springboard for the concretization of the incredible history of Africa, the African diaspora, and the Arab world,” added David Adjaye, Principal- Adjaye Associates.

The sequentially arranged open-air interior courtyards supplemented by large overhangs result in producing shade and relief from solar rays. Additionally, through the water features and native planters, it escalates air circulation while also providing natural cooling. The spatial setting requires to accommodate spaces for professional training to future generations of critical thinkers (in the African and African diaspora studies) while also developing innovative public programming that expands awareness of this critical field (within the region and around the globe) and this is strategically envisioned through various facilities like the research library, climatized archive facility, flexible auditorium and performance space along with a restaurant, café, and bookstore.

In 2023, the interdisciplinary academic institute and research centre hopes to welcome its debut class of M.A. and Ph.D. students in the field of African and African diaspora studies and also launch certificate programs in African languages, helping shape the next generation of leaders in the field. Sharjah being named as the world book capital in 2019 by UNESCO is sure to place The Africa Institute as an impactful centre catalysing learning and knowledge-sharing across the different people and partners across Africa and around the globe.